Star Command is one of my most-anticipated games for Android. Or at least it was, two years ago when it was scheduled to be released, and then again when it was released for iOS five months ago. An unreasonably long development cycle and some dodgy developer antics have made waiting for this game an exercise in frustration, and it's impossible to give it a full review without at least some bitterness hanging on in the back of my mind.

All that being said, Star Command is a solid tribute to both the Star Trek and the Sim-style, pixelated micromanagement games typified by Kairosoft's Game Dev Story and many, many others. It's undeniably fun, especially if you know a warp coil from a self-sealing stem bolt, and what warts are there are easily overlooked. The only serious issue is that the game is frustratingly short, and again, that's only gotten on my nerves because I know that War Balloon has allegedly been working on this thing for the better part of three years. The game is absolutely worth three bucks and a few hours of your time.

You start off as a rookie captain in Star Command, wandering the isometric corridors of your strangely empty ship. It's up to you to build out the infrastructure with rooms and hire crew, both of which fall into the tactical, engineering, and science branches. (Sorry, Original Series fans: Star Command uses the red-gold-blue color scheme for command, engineering, and medical.) After being given a crash course in the basic mechanics of the game, which boils down to assigning crew and building or upgrading rooms, you're sent out into the surprisingly narrow galaxy to fend for yourself.

The central currency of the game is Tokens, which come in tactical, engineering, and science flavors just like everything else. You can hire one new crew member for each token, but rooms and ship upgrades are quite a bit more expensive. The crew members themselves are surprisingly flexible, since they'll adapt their functions and abilities based on where you assign them. Putting a crewman in a gun battery makes him tactical, and he'll be able to repel invaders who beam aboard the ship. Put him in engineering and he can perform repairs when your ship is given a good pounding. Put him in medical and he can heal other crew members. But don't get too attached: your individual crew members will be permanently dead if they take too much damage, and no amount of plot armor will bring them back from the grave. They're easy enough to replace, but protecting your experienced personnel will make things a lot easier. 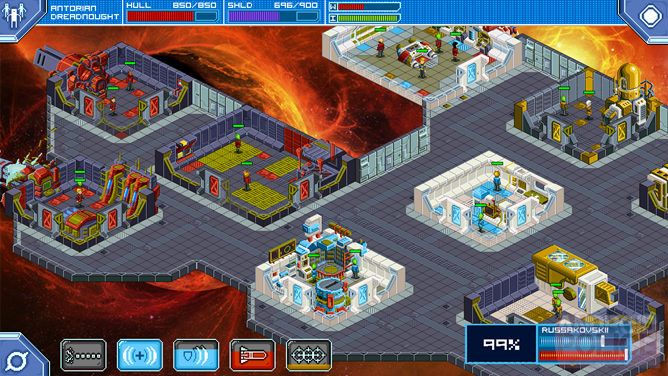 The strategy comes from the placement and commitment of your crew in battle. The effectiveness of each room depends both on the active crew members inside it and the active crew on the bridge and in main engineering. Sure, you can send your entire engineering staff out on repairs to keep your ship from falling apart, but once you do your weapons will become less effective, meaning the battle will drag on. Likewise you can send your science staff to heal the tactical team, but now your shield regeneration is gimped until they return. It's a literal case of human resources.

The mechanics of the actual battles are a strange but effective mix of real-time and turn-based strategy. All the actions happen in real time, but selecting a unit or room pauses the game until you assign them, allowing you to take a breather and plan out your moves during the hectic battles. The isometric viewpoint can be a bit of a hassle, especially when you're trying to assign multiple units in sequence - a "select all" function a la real-time strategy games would have been useful. On occasion the rooms themselves would get in the way of the gameplay, making it hard to see individual units or damage, but this was rare. 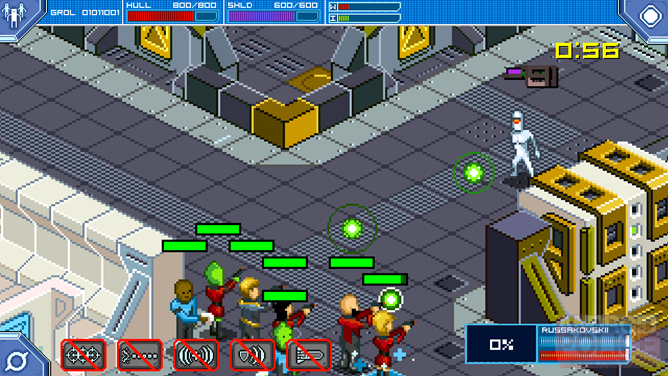 You can customize your ship along tactical, engineering, or scientific lines, assigning more or less resources to each discipline. But you'll need a healthy command of all three to beat the main campaign, and the "exploration" and "discovery" aspects of the game ring a bit hollow when most encounters boil down to either surrendering crew members for tokens or blasting as many holes in the enemy as possible. There are a variety of mission types, but without big guns firing quickly, you'll lose most of them.

Ship-to-ship battles are the meat of the experience, forcing you to effectively combine ship management, combat, repairs, and internal fights, recreating in miniature the most tense Star Trek moments. You can make your ship's weapons more powerful with fully committed crews and upgrades, but actually firing them requires you to play one of several twitch-based minigames, keeping you on your toes and making each battle feel fresh. The core of the game is impressively varied.

Put It Up On The Viewscreen

Take a look at any of Kairosoft's games. Now go watch a few hours of The Next Generation on Netflix. That's pretty much all you need to know about the visual presentation of Star Command. 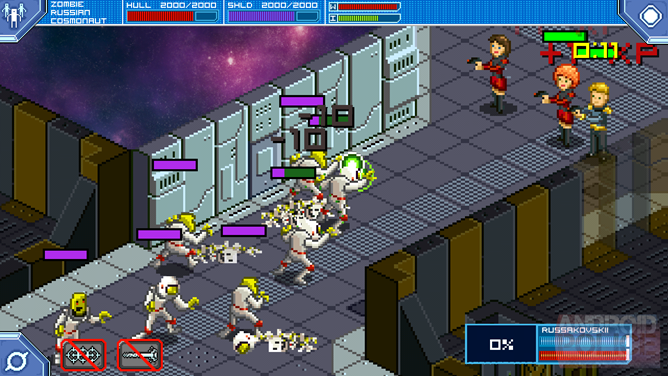 Don't get me wrong, the pixelated graphics are good, and surprisingly remain so even when you zoom all the way in. The details on ship externals and fully-upgraded rooms are varied and interesting, and the animation for both crew members and enemies is a lot of fun. (The little "aye aye" salute they give on new assignments made me smile every time.) And the fact that all this is based on 2D sprites with nary a polygon to be found means you can run Star Command on just about anything. Sometimes there's a strange mix between the pixelated ships and characters and the more conventional hand-drawn backgrounds, but it doesn't really detract from the design.

This game is clearly meant for tablets, not smartphones. Commanding your troops individually requires a lot of zooming in and out, then high-tailing it to sickbay or back to their posts. Tapping weapons or ship systems is tough, even on my 5-inch phone - if you've got a 7-inch tablet or something even larger, that's the best way to experience this game. The music in Star Command is surprisingly good (lots of "this is epic" space and battle themes), but the sound effects themselves boil down to 16-bit era beeps and boops to match the visual tone.

Star Command is completely touch-based. That works in its favor as far as strategy controls go, but there's steep learning curve as to exactly how the integrations between crew, rooms, and overall effectiveness are handled. It took about an hour of looking through menus to understand that keeping the bridge and main engineering fully staffed at all times was the best way to make the rest of the ship work smoothly. The learning curve is, rather unfortunately, almost exactly as long as the main campaign. Just a few more individual touches, like a "repair all" mode for the engineers or a simple "return to your post" command, could have improved things greatly. The fact that clearly none of the controls or art assets were changed from iOS doesn't help - resist the urge to use the Android "back" button. It does nothing.

Where's The Rest Of This Thing?

Here's the insane thing about Star Command, at least when taken in context with its extended release: it's too short. The main campaign and all the side-missions will last you about 4-5 hours, and they will fly by even faster once you get comfortable with the interface and the weapon minigames. The huge build-up for this game, both in the original Kickstarter campaign and the years (years!) since, left me cold and disappointed. True, you can restart with your crew and skills intact, but for such a fleeting experience it hardly seems worth it.

But judged on its own merits and not the admittedly bitter experiences of someone who's been following the game's progress, there's a lot to love. Even if you're not a fan of the micromanagement style, Star Command is crammed with nerdy humor from end to end. Inter-species dialogue and upgrade text is laugh-out-loud funny, especially for an old Trekkie like me. The humor content in the game is enough to make you want to keep playing all on its own. The alien species inspired by Angry Birds (which use phasers that look suspiciously like slingshots) was a brief but memorable high spot. 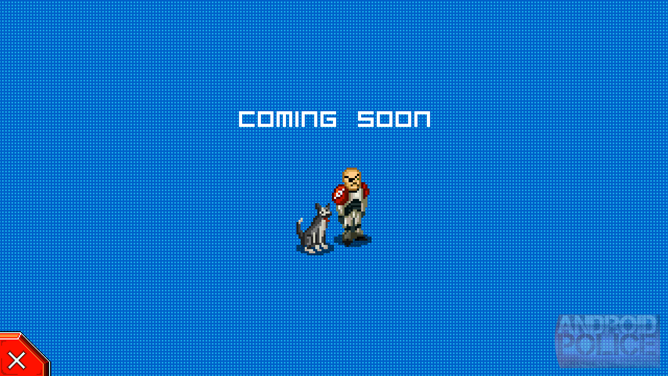 Even so, there are clearly some big holes in the game: plot lines that lead to cliffhangers, lots of "coming soon" signs hung on placeholder UI elements, and promises of more free content to come. Considering the developers' original timeframe and the fact that they are now working on a PC port, I hold zero hopes that any of this expanded content will make it to Android. Zero.

So all this boils down to one question: should you buy Star Command? If you're a fan of either Star Trek or Kairosoft, the answer is unequivocally "yes." Three bucks, no ads, and no in-app purchases for a unique game with this much personality is a steal. It's an especially good experience if you're in need of a strategy fix for your tablet. 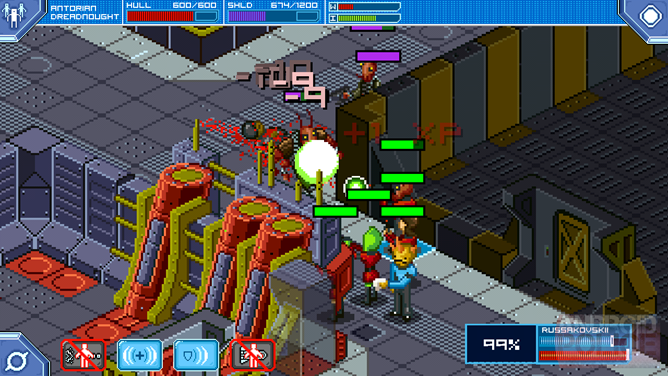 Kickstarter backers (especially those who prefer Android) will probably be disappointed with the final product, and they have every right to be. Short run time and a slightly clunky interface are downers on an otherwise excellent title. But that doesn't mean that Star Command is a bad game. It's a good game. It's just nowhere near as good as it could have been. 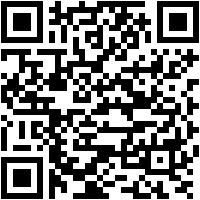