From a hardware perspective, the One max and the older One have quite a lot in common indeed. The same 1.7Ghz Snapdragon 600 processor (not the faster 800 that some were surely hoping for), same 2GB of RAM, same 4 "ultrapixel" camera, now minus optical stabilization. The screen is 1080p, stretching out the same resolution to a larger LCD panel. One important difference is that the rear panel is now removable, allowing the user to expand the built-in storage (16 or 32GB, depending on model) with a MicroSD card. This is something that a vocal subset of users has been begging for. Unfortunately you can't swap out the battery, so 3300mAh will have to do. 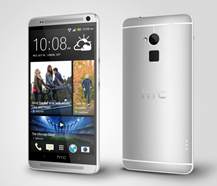 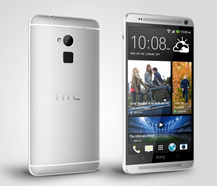 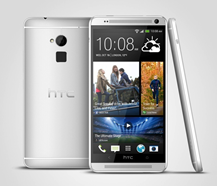 Design remains consistent with the One family, with the notable addition of the fingerprint scanner sitting in the same finger-friendly location as the hardware controls on the LG G2. The power button has been shifted to the side, but the IR port and "Boomsound" speakers remain in place. The software is HTC's improved Sense 5.5 over Android 4.3, including improvements to the Zoe, Blinkfeed, and gallery apps. And of course, you'll be able to unlock the phone with your finger, not unlike another late-breaking high-profile phone. HTC has thrown in a little more functionality with swipe-based app launches that incorporate the scanner. 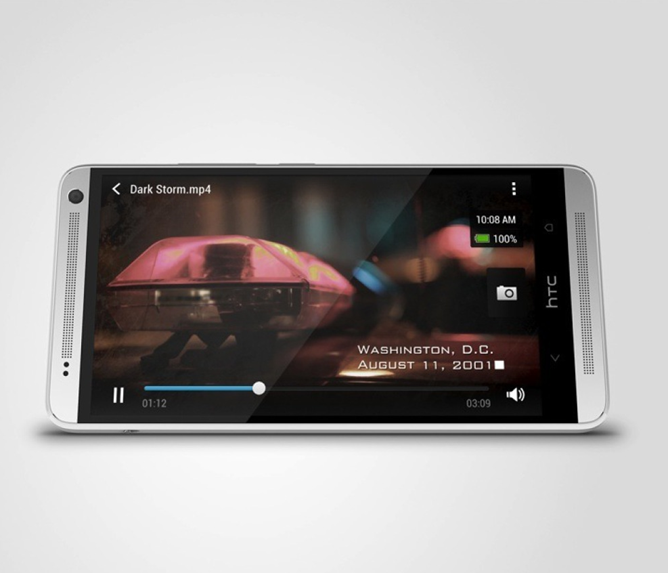 HTC says that the One max will start rolling out later this month to worldwide markets. Support for Verizon and Sprint in America is explicitly mentioned in the press release, and we'd be very surprised indeed if it wasn't also bound for AT&T, T-Mobile, and regional carriers. Unfortunately no specific dates or prices were revealed. Considering that it's competing directly with the Galaxy Note 3, you can expect the price to be high. HTC will also be offering the Power Flip Case, a first-party case/battery combo that packs 1150mAh of extra juice. 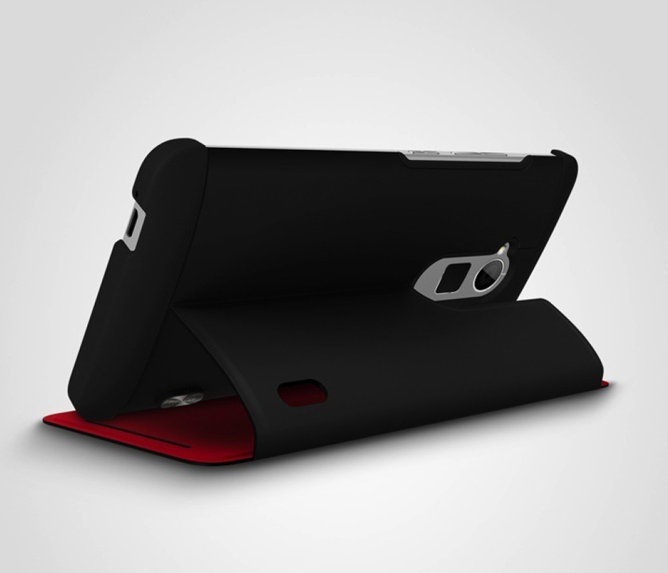 London, October 15, 2013 - HTC, a global leader in mobile innovation and design, today announced the HTC One max, a super-sized smartphone that brings the award-winning design, functionality and performance of the HTC One to fans of larger handsets. A new Fingerprint Scan feature takes convenience to a new level while acclaimed features including HTC BlinkFeed™, HTC Zoe™ and HTC BoomSound™, combined with the new HTC Sense 5.5, which are all enhanced to continue to deliver the best overall smartphone experience, now on a larger screen.

"The addition of the HTC One max means that we now have an HTC One phone for everyone. The family has been built on quality and game-changing innovations and the HTC One max is certainly no exception," said Peter Chou, CEO of HTC Corporation. "The upgrade to HTC Sense 5.5 will provide our most amazing mobile experience yet, with the HTC One max delivering the size and power required to do everything you want, and more, without compromise."

The HTC One max's 5.9" full HD1080p display is perfect for enjoying photos, videos and movies on the go. Smooth and efficient performance comes courtesy of a quad-core Qualcomm® Snapdragon™ 600 processor featuring a quad-core 1.7 GHz CPU enabling jaw-dropping performance, ultra vivid videos and booming sound. Whether you're watching videos in stunning HD, playing games or checking out what's hot online, the HTC One max sounds amazing, looks sharp and keeps working when you need it.

The 16GB or 32GB onboard memory can be expanded thanks to a microSD™ card slot, with a massive 50GB of additional free Google Drive online storage being offered exclusively to HTC One max owners

The large 3300mAh embedded battery means that this level of performance will last and last. Even the most intensive users will find the HTC One max is up to the challenge thanks to the optional HTC Power Flip Case, a stylish 1150mAh battery expansion for your HTC One max which offers both protection and extra juice when you need it most.

Maximum convenience at your fingertips

The average person checks their phone multiple times a day, so the HTC One max welcomes a new era of convenience and advanced functionality thanks to a built-in Fingerprint Scan feature. Located on the back of the device, the fingerprint scanner allows users to lock or unlock the screen and quickly launch up to three favourite applications by assigning an individual finger to each.

The HTC One max's Sense 5.5 upgrade comes with a more social, personalised HTC BlinkFeed that can be further refined by customisable topic categories and new integration with premium content providers including Instagram and Google+. Up to 120 articles can also be downloaded for offline viewing, making BlinkFeed even better for snacking on information wherever and whenever you are.

Featuring HTC's UltraPixel camera technology, HTC Zoe mode, that brings your photos to life, and a 2.1MP front-facing camera, the HTC One max will capture stunning photos and full HD 1080p videos whether you're the photographer, the subject or both. Dual Capture means you can now snap memorable moments and your reaction to them in one extraordinary photo or video by simultaneously shooting with the front and rear cameras.

Improved imaging is also introduced through Video Highlights, which combines your photos and videos to create a mini movie complete with the soundtrack and visual theme of your choice. And with the HTC One max, your Video Highlights can now be any length you want.

Design at its Best

Available in Glacial Silver, the HTC One max shares the same premium design credentials as the rest of the HTC One family, providing an all round exceptional experience.

The HTC One max will begin rolling out across the globe from mid - end October. See specific regions for details.