Don't let the name fool you - the LG G Pro Lite isn't a small phone. This handset has a 5.5-inch screen, a 3,140mAh battery, dual SIM slots, and its own stylus. That means the G Pro Lite is just as large as the Optimus G Pro itself. What makes it "lite" then? The specs. The new handset drops from a quad-core processor to a dual-core processor, and with a 960 x 540 resolution, you can forget watching the 1080p content the original device could handle. 32GB of internal storage has changed into 8GB, and the 2GB of RAM has been sliced in half. So the G Pro isn't slimmer, just slower and less pleasant to look at. 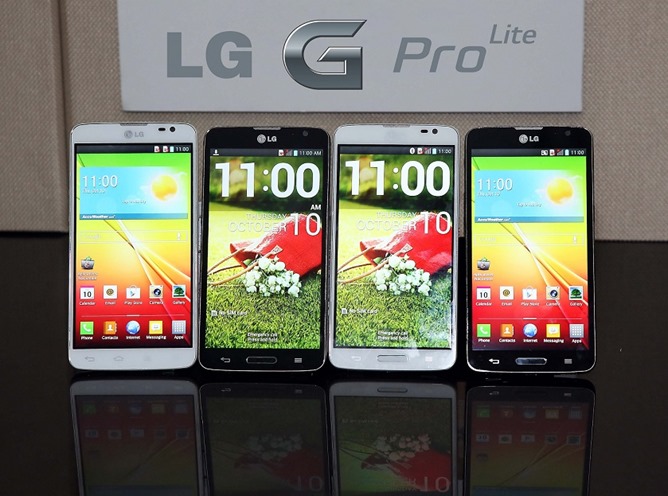 The G Pro Lite will debut later this month in Latin America before arriving in Asia, Russia, China, India, and the Middle East. With specs like these, we assume the eventual pricing will warrant the "lite" moniker, but that's one detail LG has yet to provide. There's no reason to covet this phone over the Optimus G Pro, but at the right price, this may just be the best option for big phone fans on a budget.

SEOUL, Oct. 10, 2013 — To fulfill the needs of practical smartphone users who want to enjoy the convenience of a large display, LG Electronics (LG) today introduced to the world its latest device, LG G Pro Lite, with a 5.5-inch display and unique UX features.

“With LG G Pro Lite, we are introducing a competitive device to the masses in the growing large smartphone market,” said Dr. Jong-seok Park, president and CEO of LG Electronics Mobile Communications Company. “The market for smartphones with displays over five inches will continue to grow and LG is in a great position to capture these new customers when they’re ready to move up from their current phones.”

The Stylus Pen that is included with the LG G Pro Lite increases the smartphone’s usability. The Stylus Pen allows for quick and accurate handwriting and can be stored conveniently in a slot at the top of the phone. And for customers who are increasingly turning to their smartphones for entertainment, LG equipped the LG G Pro Lite with dual speakers for excellent audio performance with or without headphones. What’s more, LG’s latest smartphone maximizes user convenience with a Dual SIM feature and a dedicated Hot Key to make switching between two SIM cards easier than ever before.

LG G Pro Lite comes with LG’s practical and convenient UX that features all the benefits of LG’s premium G Series, G Pro and G2. KnockON powers on the G Pro Lite with two taps to the display, Pause and Resume Recording allows for the recording of short snippets of video which can then be viewed as one continuous file, QSlide controls up to three different apps in one window, QuickMemo gives users the ability to instantly jot memos or notes from any screen without having to open a separate application and QTranslator instantly translates words and sentences from images captured with the smartphone’s camera.

LG G Pro Lite will make its world debut this month in Latin America followed by markets in Asia, Russia, China, India and the Middle East.

Dropcam Announces The Dropcam Pro Along With Updated Android App

Fitbit Force Fitness Bracelet Is A Personal Trainer On Your Wrist That Can Double As A ...