Google left many of us scratching our heads when they relaunched Quickoffice last month as a free app, one that probably should have shipped as a Google Drive update instead. Nonetheless, a new version has rolled out that nudges things in the right direction. Now opening a Google document inside Quickoffice will launch the file using the Google Drive app. Previously the document was merely displayed as a PDF instead. 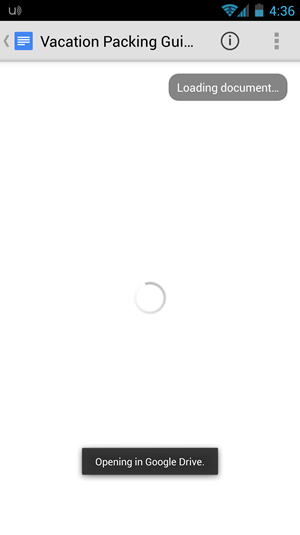 The opposite also works, though that functionality isn't new. If you open a Microsoft Office file within Google Drive, it will launch inside Quickoffice. Given how similar the two apps look, you might not even notice that you were kicked from one to another. We don't know if Google has any plans to merge Quickoffice and Google Drive down the road (though we would be happy if they did), but in the meantime, the two apps might just grow into a delightful symbiotic pair.

There isn't much else to see here. If you weren't drawn to the app when it first entered the Play Store, this update probably won't change your mind.

T-Mobile's Uncarrier Phase 3 Announcement Could Be Global Data In Over 100 Countries At No ...

Sprint Galaxy Note 3 Owners Complain of Garbling, Morphing, Popping, And Just All Around ...