Carrier-branded Android tablets in the US are usually offered either at outrageous prices or with a two-year contract (or both - I'm looking at you, AT&T). It's refreshing, then, to see Sprint selling at least one tablet with the conventional subsidized price. The Samsung Galaxy Tab 3 7-inch will go for $49.99 at Sprint stores starting on October 11th, a full $150 less than its WiFi-only counterpart. 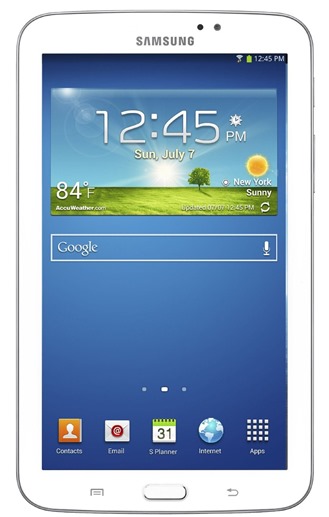 Of course, whether or not the Tab 3 is worth even that price is open to interpretation. With a 7-inch, 1024x600 screen, it's looking mighty dated next to the latest Nexus 7 and Kindle Fire HDX models. A dual-core 1.6Ghz processor (which might be swapped out for a comparable Qualcomm version on the LTE model), 16GB of MicroSD-expandable storage, and a 3 megapixel real camera don't help things. Of course the Sprint model has access to CDMA 3G and Sprint's relatively small LTE network, if that helps. Then again, Sprint's lineup isn't exactly bristling with options: aside from the iPad, the only other tablet being sold by Sprint is the Galaxy Tab 2 10.1, and it's currently out of stock.

You can get the $50 Galaxy Tab 3 with a new two-year service plan, a new Sprint line, or on the new One Up plans, though the carrier isn't saying how much the interest-free charges or unsubsidized cost will be. The tablet will be sold in white starting on Friday, but a black version will be available "in time for the holidays."

OVERLAND PARK, Kan. (BUSINESS WIRE), October 07, 2013 - A small device can offer big-time productivity for a business and fun for the whole family. So today, Sprint announced Samsung Galaxy Tab® 3 7.0 will be available on Friday, Oct. 11, with a special introductory price of $49.99 (excluding taxes) with a new line or eligible upgrade and two-year service agreement. Customers will be able to purchase this versatile new tablet in all Sprint sales channels, including Sprint Stores, Sprint Business Sales, Web Sales and Telesales at 1-800-SPRINT1. Initially, Galaxy Tab 3 will be available in White, but a Midnight Black version will also be available for the holidays.

The 7-inch Galaxy Tab 3 features Android™ 4.2, Jelly Bean, Sprint 4G LTE, where available, a 3-megapixel rear-facing camera with video capture and 1.3-megapixel front-facing camera for video chat. Sprint customers can add a data plan for Galaxy Tab 3 7.0 to their account for as little as $5 per month (excluding taxes and surcharges). Customers can also take advantage of Sprint One UpSM, a new upgrade program that gives customers the ability to upgrade their smartphone every 12 months.

Sprint continues to bring a better wireless experience to customers across the country as it builds out its all-new 3G and 4G LTE network. Sprint now provides 4G LTE service in 185 marketsnationwide and is aiming to provide LTE to 200 million people by the end of 2013. For the most up-to-date details on Sprint’s 4G LTE portfolio and rollout, visit www.sprint.com/network.