Looking to mod your Verizon HTC One in every way imaginable? You're going to need S-OFF, and it looks like you won't be waiting long. Recognized XDA Developer beaups has posted a picture showing the Verizon device's bootloader indicating S-OFF. 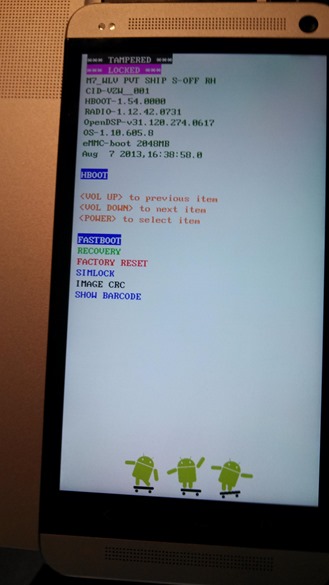 The post comes by way of the bootloader unlock pledge thread on XDA. Users have so far pledged $5,205 for a bootloader unlock with S-OFF, which beaups could conceivably claim soon. Getting S-OFF on an HTC phone disables all security features protecting the device's memory. This is what you need if you plan to change the bootloader, radio, and other low-level system components. It also makes fiddling around with RUUs a bit easier.

Details on the method used by beaups and company are expected soon. You can wait a few days, right?

Update: Well, that didn't take long. Beaups has released the rumrunner S-OFF tool (by beaups and fuses) with root by jduck for the Verizon HTC One.

WiFi-Only Samsung Galaxy Note 8.0 Finally Receiving Android 4.2.2 Via OTA And Kies In The US

Samsung HomeSync Is Finally Shipping In The US, Free Companion Android App Now Available In The ...