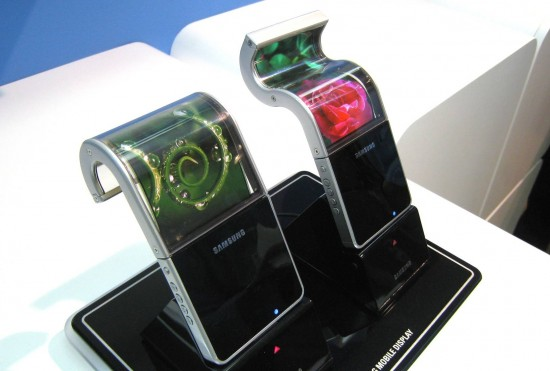 To achieve this feat of bendy engineering, LG swapped out a glass panel for flexible plastic, which allows for a concave radius of 700mm (a pretty extreme curve, even compared to the curved glass panels on the Nexus S and Galaxy Nexus) and an "unbreakable" build. How this will affect device design isn't clear: you'll still need to use conventional PCB boards, batteries, cameras, et cetera. Eventually LG will probably provide flexible panels for other manufacturers, as they do now with LCD screens.

Rumors have been flying about new phones from both LG and Samsung that will integrate flexible screens of some kind. Since the two companies have been display rivals for decades and the rivalry has only spilled over into smartphones, it would surprise no one if this came to pass. I'm more interested in what kind of advantage a flexible display might offer end-users - surely just adding a curvy display to a candy-bar form factor can't be worth all the fuss, right? We should find out sometime in the next few months.

“LG Display is launching a new era of flexible displays for smartphones with its industry-leading technology,” said Dr. Sang Deog Yeo, Executive Vice President and Chief Technology Officer of LG Display. “The flexible display market is expected to grow quickly as this technology is expected to expand further into diverse applications including automotive displays, tablets and wearable devices. Our goal is to take an early lead in the flexible display market by introducing new products with enhanced performance and differentiated designs next year.”

LG Display’s flexible OLED panel is built on plastic substrates instead of glass. By applying film-type encapsulation technology and attaching the protection film to the back of the panel, LG Display made the panel bendable and unbreakable. The new display is vertically concave from top to bottom with a radius of 700mm, opening up a world of design innovations in the smartphone market. And only 0.44mm thin, LG Display’s flexible OLED panel is the world’s slimmest among existing mobile device panels. What’s more, it is also the world’s lightest, weighing a mere 7.2g even with a 6-inch screen, the largest among current smartphone OLED displays.

According to research firm IHS Display Bank, the global flexible display industry will see dramatic growth and become a USD 1.5 billion market by 2016, exceeding USD 10 billion by 2019. LG Display plans to advance flexible display technologies and bring innovation to consumers’ daily lives with the introduction of rollable and foldable displays in various sizes.