Charging up phones, tablets, Bluetooth accessories, and external batteries can be a logistical nightmare. As someone who reviews phones (I had, no joke, 9 Android devices on my desk last week at one point), it's a problem that has driven me to the edge of sanity on multiple occasions. As such, I never travel far without a trusty USB wall charger and a portable power strip. The thing is, though, until recently, I wasn't exactly on top of charging my stuff, especially at home (aka work). My workspace was in disarray - microUSB cables strewn across the underside of my desk in a tangled web of watts, USB wall chargers for toys long forgotten in every drawer, and, constantly, at least one dead gadget I was too lazy or forgetful to hook up. Sounding familiar?

Well, good news: here's a list of some of our favorite charging tools, many of which should help ease the pain and chaos of keeping 3 phones, 2 tablets, and a gaggle of other microUSB goodies juiced up (in no particular order).

Yes, the company name on the Amazon product page is both spelled wrong and keyword-loaded to the point of silliness, but hear the BESTEK wall charging station... thing out! Your wall outlets are kinda sucky. You know it, I know it, that power strip you bought at Staples 12 years ago that was not originally off-white knows it. Now, you could seriously tackle this problem and replace your wall outlets with these guys, but we're not all DIY electricians. And, speaking for myself, also maybe a tiny bit lazy. 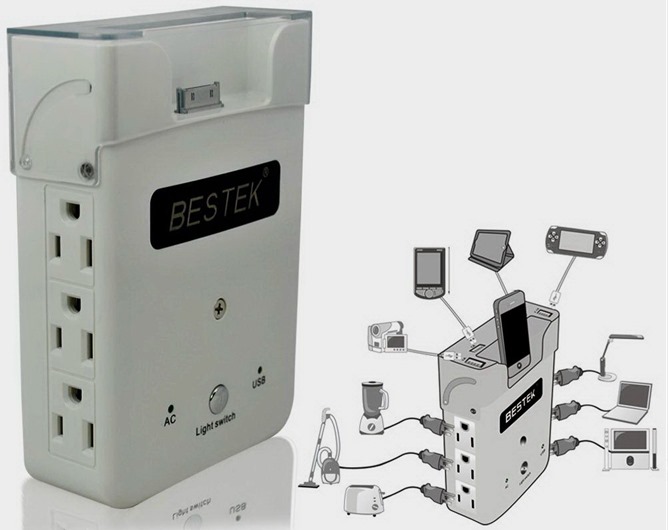 Oh, and it has a night light. Yeah, a night light - because stumbling around under your dark, dusty desk fishing for an open outlet while holding your phone between your teeth with the LED flash on is for people without night lights. You'll feel like a genius, Mr. I Got This - There's A Night Light Guy.

But what about my gadgets? Am I just supposed to dangle them off this thing like the $600 fruit of a smartphone tree? Boom: plastic folding tray on the top. Problem solved. Well, it doesn't really do much for tablets, but hey, it's better than nothing.

Downsides? Well, the BESTEK does only come with a 1-year warranty, and input is strictly in the 110-125v range. The unit also takes up both of your outlets - there's a plastic dummy ground on the bottom to keep it secure (there's also a mounting screw if you want extra stability). Otherwise, though, this power hub is pretty dang cool.

Q: What's with all this amp stuff? Am I going to fry my phone / tablet by using the wrong USB port?

A:No. The amperage rating of a USB port pertains only to the maximum level of current it can handle. Any modern USB charging interface will intelligently scale the current and voltage of the power source to the maximum safe level the device can receive. The point of a higher amperage port is for devices that can take advantage of it - like iPads and other tablets (and some phones, like the Galaxy Note 1/2/3 - which have 2A charging interfaces). Most modern Android phones have 1.5A charging interfaces, but will still charge reasonably fast on a 1A port. Though they will obviously do so more quickly on a 2.1A port where they can charge at the full 1.5A.

Wireless charging, for all its coolness, really isn't there yet from a ubiquity / cost-effectiveness standpoint. Most Qi chargers only power up a single device, they're pretty expensive, and you need gadgets that support wireless charging (or an ugly case) in the first place. It could be years before inductive charging really becomes a standard feature on most battery-powered smart devices.

If you're like most rational human beings, the process of attaching your phone or tablet to a microUSB cable is not one you relish in. You have to find the cable, figure out which way to rotate it, make sure it's all the way in the phone, and other first-world-problem kind of stuff. It's a drag. The ZipMini feels your pain. 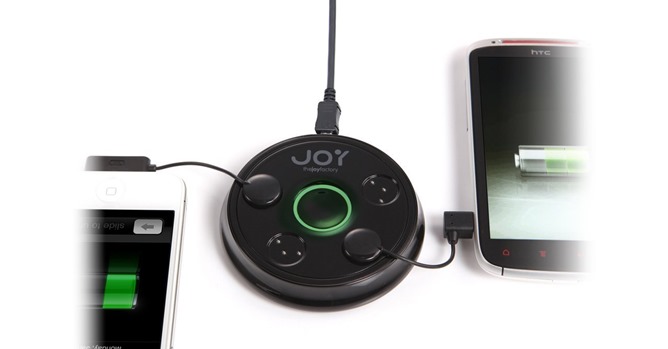 Since, as you can see, the cable only really "plugs" from one end, you can substantially reduce your port-rage by leaving the ZipMini's small microUSB cables plugged into your device most of the time (eg, when you're at home / the office), as opposed to yanking them out every time you pick it up. And when the microUSB cable you're using is only 3 inches long, from all but an OCD standpoint it's not really getting in your way. At the end of each of these cables is a little circular pebble-like thing with some contacts on the bottom. The ZipMini platform (available in 4-port or 16-port (!) configurations) is a flat plastic disc with indentations in the shape of those little pebble-like things.

By the power of magnets - ICP fans, this is where it gets crazy - the little pebble things are drawn into the indentations, where the charging contacts meet their respective pins, and off and away you go - you're charging up. And if you need to walk away and use your phone for a few minutes, or just check it real quick, there's no need to mess around with ports and plugs - it just slides right off the platform.

This isn't a huge deal for everyone, obviously, and the ZipMini does have a couple drawbacks. First, the little pebbles are prone to getting dislodged, and there's no indication on the charger if a particular port is no longer delivering power (idea for the next version, maybe?). Second, holy crap those little ZipTail cables are expensive. The charger comes with two cables (one Apple 30-pin, one microUSB), and additional 3" microUSB cables are $11 apiece ($16 if you want a 6-incher). Yeah.

But if you're willing to drop some coin for the convenience the ZipMini undeniably provides, it may be worth it. Unfortunately, there's no info about whether the ZipMini's voltage readiness, so assume that it's 110-120v spec.

Count on your hands the number of times a product wasn't made better by a swivel action. Swiffer? Check. Vacuum cleaner? Obviously. Office chairs? Can you imagine? If there's a product out there that was made worse by swiveling, I don't want to hear about it, because as far as I'm concerned everything's better if it can rotate. 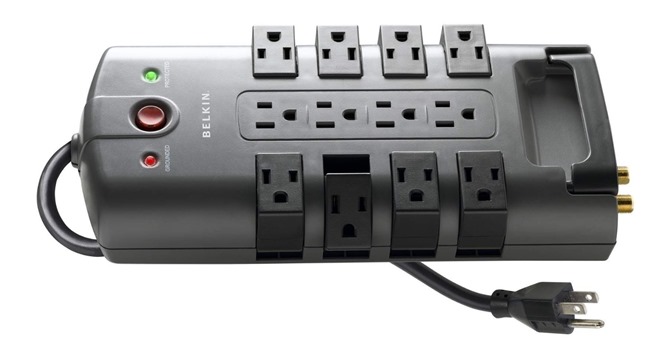 So when I saw the Belkin Pivot Plug, with up to 8 swiveling AC plugs (12 total), my head was turned (I'm so sorry). The idea is simple: it's a strip / surge protector, but it has plugs that can rotate up to 90 degrees in order to accommodate those power bricks that look like they spent a bit too much time in the capacitor cafeteria at ACU (Alternating Current University).

Once again, no info on voltage compatibility here, so assume this product is designed for 110-120v tolerance only.

Sometimes, you just need a buttload of USB ports. Really, who doesn't, though? USB power is in high demand with all the gadgets we carry, and toting around separate AC adapters if you want to charge multiple items at once is a big pain, unless you want to slow-charge through your laptop or something. And who wants to do that? Nobody, that's who.

The Anker USB wall charger has 5 USB ports on it, and they're labeled on the back such that you can know what amperage each is capable of producing. You get two 2A ports, two 1A ports, and one 1.3A (apparently that's the Galaxy Tab charging spec?) port. The peak amperage the Anker can handle is 5A, less than the capacity of all ports combined (7.5A), but with 25W of max power output, multiple reviewers indicate it's perfectly capable of charging 5 devices at a time, albeit a littler more slowly than it would otherwise on the higher-amp ports.

This charger is also 110-240v-ready, so you can take it overseas with the only requirement being the appropriate outlet adapter. The drawback for travel, though, is that the Anker has an external power supply with a 3' cable. It's a pretty generic two-prong 650mA adapter, though, so you could probably find a cheap auxiliary cable to keep with you for travel. Personally, I like the cable because it means I can stick this thing on my desk. It seems robust enough, and at $20, it's pretty great value for money.

Wait, another multi-port USB wall charger? What's the deal here? The EasyAcc is a lot like the Anker, minus a port (so no weird 1.3A), so it has two 2A ports, and 2 1A ports. They're also clearly labeled on the front as such, unlike the Anker. 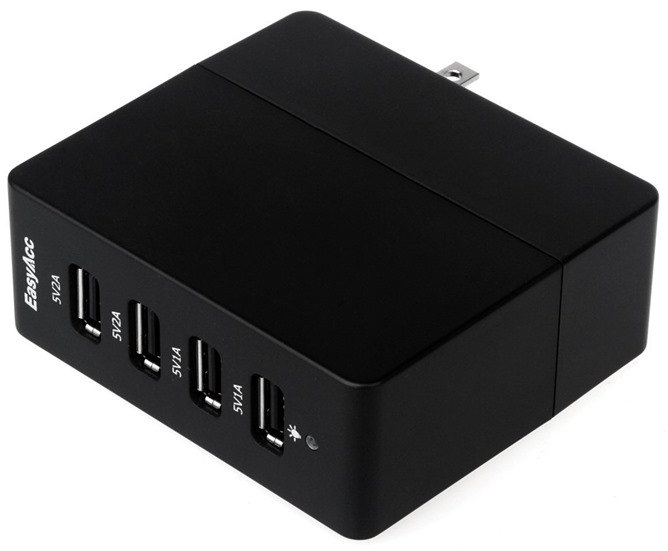 The EasyAcc, though, is probably asuperior solution for travel - it's totally cordless. Just plug it directly into the wall and start charging. No worrying about adapter cables or other nonsense, it's stupid easy and convenient. Like the Anker, the EasyAcc is also international-friendly and accepts 110-240v. If you're into black, the EasyAcc is also black, whereas the Anker is quite white. So maybe that's a consideration.

The downsides are pretty cut and dry: you only get 4 ports, and because there's no power adapter cable, your USB cables need to reach from the wall to wherever you want to charge your stuff.

Travelling with a big, bulky power strip is a pain. It also means that every time you do travel, you have to dig it out of some dingy cardboard box that's been sitting in the garage for 8 years with a bunch of dead spiders and dust all over it. That's disgusting. Dead spiders and dust are not an easy, convenient portable power solution. 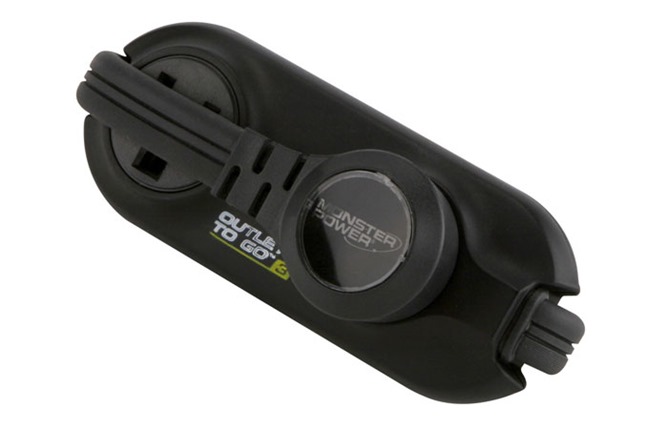 I know what you're thinking - "A Monster product? I took a vow not to support evil with my money." But hear me out, because this product is a lifesaver. The premise is simple: a really portable, space-saving power strip. No surge protection, just a high-quality outlet splitter that easily fits in any bag. It really is small, too - the 4-outlet version is 6.25 inches long, 2.25 inches wide, and 1.8 inches thick. 2 outlets on the front, 2 on the back. For maximum portability, the power cable loops around the entire strip and plugs into one of the outlets. You cannot find something out there with this many reasonably-spaced outlets in this small a package. Not unless it's one of those brown daisy-chain splitter / extension cables from the 1970's, in which case, enjoy your fiery demise.

There are several versions of the Outlets To Go, but know this: despite every label and review saying otherwise, they are 110-240v compatible. Do not listen to anyone who says they aren't. I have one, I've used it in Germany and China with a simple wall plug adapter, and it worked flawlessly. Even Monster's own FAQ says they work overseas.

There are several Outlets To Go models to choose from, so here they are.

Have some suggestions of your own? Feel free to chime in below.