It's about bloody time. Starting today, some of HBO's most popular currently-running original programming is available for purchase on the Google Play Store. For starters the fantasy drama Game of Thrones (seasons one and two), urban fantasy True Blood (seasons one through five), and political drama The Newsroom (season one) are available. Episodes are $2.99 for the dramas and $1.99 for The Newsroom, with small discounts for buying a full season. 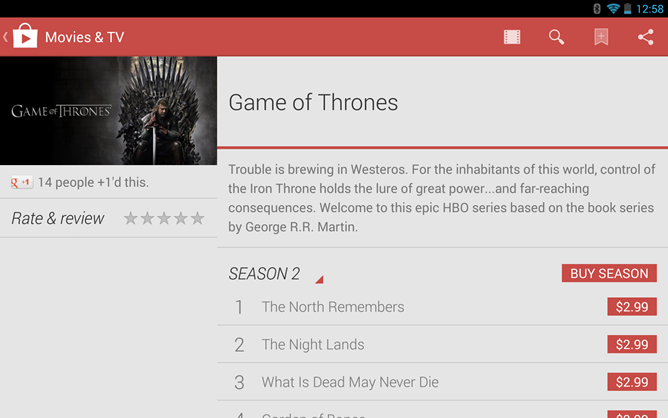 You may notice a common theme here: episodes from the latest completed seasons aren't available. That's fairly typical for premium cable networks - remember, it's not TV, it's HBO. Season 3 of Game of Thrones, season 6 of True Blood, and season 2 of The Newsroom will probably be available on or near the release of the DVD sets for each season... which is generally right before the start of the next season on cable. Gotta sell those DirecTV add-ons somehow, right? HBO subscribers can access new episodes at any time via the HBO Go app.

According to the official Google Play Twitter account, HBO will be adding more of its original programming soon. The shows are exclusive to the United States for now. With international licensing agreements being what they are, it's unlikely that they'll be opened up for new territories anytime soon.