Yesterday, I picked up my new baby - a brand spanking new Galaxy Note 3 that replaced my aging Note 2. (Update: I'd like to clarify this since a lot of people have misconstrued the "aging" comment for something it's not. My Note 2 has a screen crack and shows significant wear and tear. You may not consider the Note 2 or INSERT_DEVICE_HERE aging, but that's not what this line was about - it was about a very specific phone I was upgrading from and nothing else.) It's a great device on many fronts, as David pointed out in our extensive review, but it appears putting out solidly built products was not on Samsung's roadmap yet again. 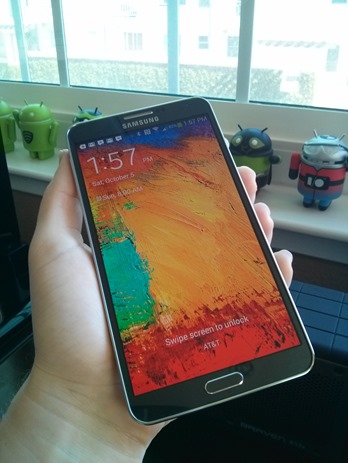 During the several hours I spent setting up the Note 3, I started subconsciously noticing something very odd - the Home button at times looked crooked. At first, I dismissed it because it was dark around and thought I was just seeing things. Then, I noticed it was crooked again, except this time the other way around. What the...

Upon closer inspection, I have to my dismay confirmed that there's so much play in the Home button that your finger will constantly make it rotate and look crooked. This GIF, comprised of two photos I took of the Note 3, shows the seriousness of the issue. My OCD just reached level 85:

If you want to test it on your Note 3, just use your finger or fingernail and try pushing the left side of the button up and the right side down (don't stick your fingernail into the crack, just use it to gently nudge the button up and down). Then do the reverse. In comparison, the Note 2's Home button is rock solid. The Nexus 4... well, it doesn't have one, so there's yet another benefit to software buttons.

Thinking this could possibly be a one-off defect, I jumped on Google and found this thread on AndroidForums with exactly the same issue being reported by Note 3 owners from different parts of the world on different carriers. While it doesn't have hundreds of replies (yet), I do believe it points to a defect in the manufacturing process. I started a thread on XDA just now as well to figure out if users there are affected. Finally, I reached out to our Samsung rep for an official response.

Come on, Samsung, you can do better than that.

Shadowrun Returns Review: A Magnificent Example Of The Role-Playing Genre, But In Need Of ...