A few weeks back we pointed out a neat little trick in the Chrome Beta for Android. By toggling the NTP flag, you could get a spiffy new tab page with a search box and scrollable list of recent sites. The last update to the app seems to have killed it, but now we know why – Chrome 31 will make that UI the default in Android. 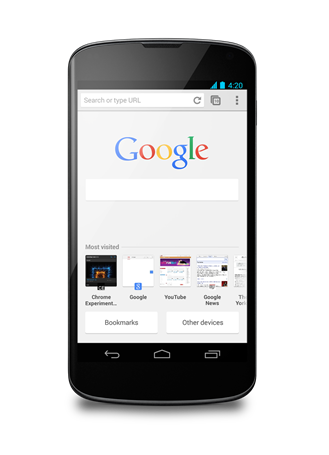 There's already the Omnibox in Chrome for performing searches, but Google says it noticed users would still go to the Google homepage. So what to do? Bring the Google homepage to them. The top half of the new tab page has the Google logo and search box, just like if you went to Google.com. It might not be faster for everyone, but the new look is nice.

After it hangs out in the beta channel for a bit, Chrome 31 will eventually make its way to the stable app. Chrome 31 Beta is supposed to hit the Play Store at some point today, but no sign of it yet. We'll let you know if we spot it.