Yahoo seems to be taking a page out of the NFL's playbook: the official Android app just jumped from version 1.1.4 all the way to 3.2. (It's probably been changed to match the iOS version.) But at least there's plenty of new content to justify the jump. In addition to a new Holo-style user interface sporting the revamped Yahoo logo (which still clings annoyingly to that vestigial "!"), the app has a ton of new options for content consumption. 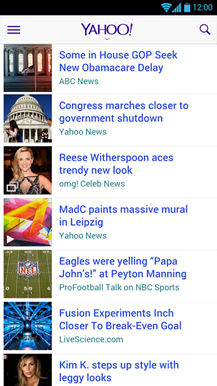 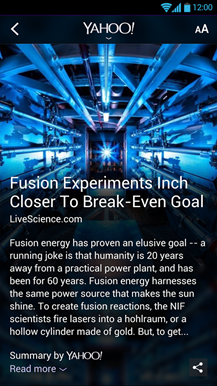 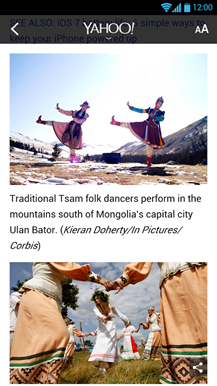 First of all, Yahoo user now get treated to slideshows and videos embedded into stories, something that the original app was sorely lacking. The category filter (the page where you choose which news items you want to see and which to ignore) has been significantly overhauled. It's easier to select individual topics to see more of after each story - one of the screenshots of the dynamically-filled list includes "Government shutdown." 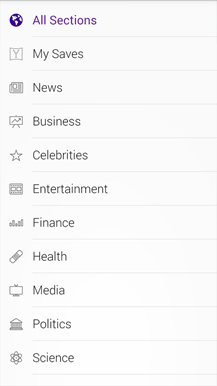 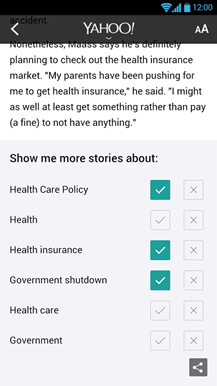 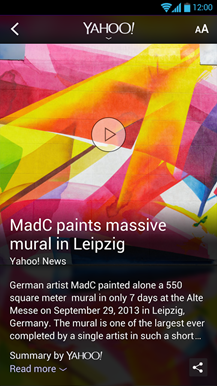 You can save stories from the Share menu on the summary page, though "save" is a bit of a misnomer - it's more like a bookmark that's tied to a Yahoo account. The app now includes optional notifications for breaking news, which should be handy for those who want to keep abreast of their topics without constantly checking the app. But watch out: a few early upgraders are reporting significantly increased battery usage with this feature enabled. All in all, the upgraded app looks like a pretty decent news service, though I really wish it had some kind of widget available. 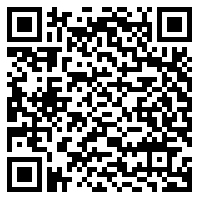