We've all been there: for 20 minutes during takeoff and landing, the cabin of an American airliner becomes a virtual Faraday cage as every passenger is told to turn off everything with a battery, from the latest Android superphones to the humble Game Boy. This practice has been heavily criticized in the last few years, and there's finally some real movement towards tossing it out the window. The Wall Street Journal reports that a Federal Aviation Administration advisory panel has recommended approving electronic devices for use during takeoff and landing, including WiFi data access. 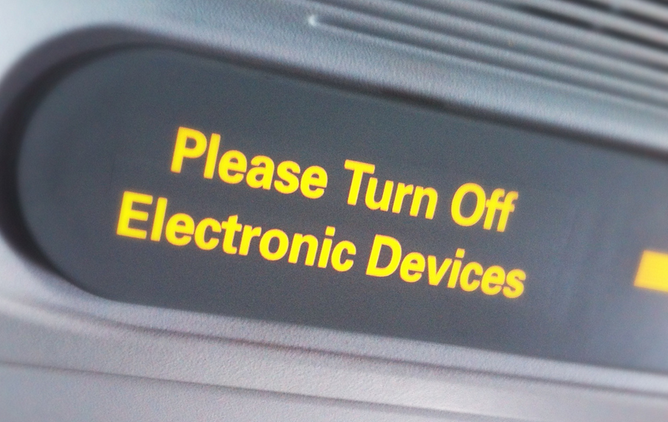 Current restrictions ban basically all consumer electronics devices from being used below an altitude of 10,000 feet for fear of interfering with the plane's electronic instrumentation. According to the advisory panel, modern aircraft are so well-shielded that there's no realistic way that a smartphone, tablet, or e-reader would be able to interfere with critical airplane systems. The panel still advises that standard cellular connections (voice, 3G, and LTE data) should remain off-limits due to concerns about interfering with ground communications. The panel urged the FAA to work with the FCC to look into the realistic dangers, or lack thereof, of cellular signals. The panel also recommended keeping the restriction on laptop computers, as their hefty weight could be dangerous if they were to fly through the cabin in an emergency.

Allowing WiFi access is a nice perk, but realistically the ability to use electronic devices themselves is the real win here. In-flight WiFi is still only available on about 60% of domestic flights, and it's usually so expensive that for a 1-3 hour flight it simply isn't worth it. GoGo WiFi (the largest provider for American flights) doesn't even work below 10,000 feet anyway because its system uses terrestrial towers. The ability to work or consume entertainment during the takeoff and landing period is much more valuable (to me, at least) than the ability to surf the web or check email. No more leafing through SkyMall or packing a dog-eared paperback!

With this recommendation and a few more rounds of testing, the FAA could move to change the electronics restriction in less than a year - possibly even before the end of 2013. "Our assumption is it's not years, but months," said Paul Misener, Amazon's CP of global public policy. It looks like the FAA is finally taking real, meaningful steps towards gate-to-gate electronic use for passengers.