Back in early July, I reviewed what has since been my favorite portable Bluetooth speaker: the Ultimate Ears BOOM. It really lives up to its name, delivering top-notch sound quality that's nearly impossible to find in most speakers twice its size. Of course, that kind of quality comes at a price – a $200 price, to be exact. And if you wish to utilize the Double Up feature that lets you use two BOOMs at the same time, that price doubles. It's hard enough for many users to even justify one BOOM.

Today, Ultimate Ears announced the MINI BOOM, the BOOM's little brother. At basically half the size of the original, the MINI BOOM is instantly portable, and comes in at half the cost ($99). But don't let its pint-sized exterior fool you – this little guy packs a wallop, and easily lives up to the BOOM name. 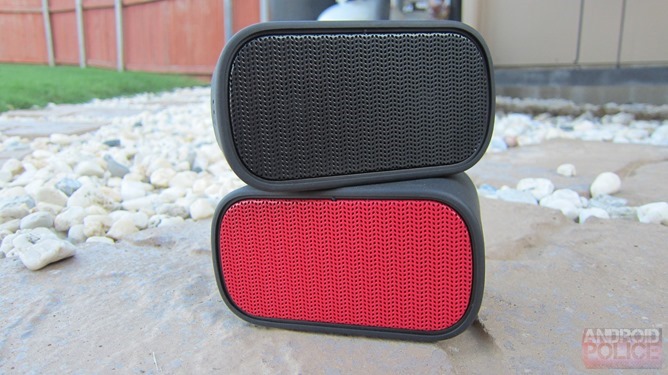 If you've read my past speaker reviews, then the MINI BOOM may look pretty familiar to you. Good reason, because it looks identical to the Logitech UE Mobile Boombox in essentially every way. Same form factor, shape, size, material, and button configuration. This, of course, raises the question is it the same exact speaker?

Let me just put that concern to rest right now: it's definitely not the same speaker. The sound profiles are completely different, so one can only assume that the MINI BOOM likely has very different innards compared to the Mobile Boombox. But it doesn't stop there with the differences; the MINI BOOM also has features missing from Logitech's take on the ultra-portable speaker, like the same Double Up feature that I love on the larger BOOM. But I want to stop myself before going overboard with the comparisons to the Mobile Boombox – while they definitely look the same, the sound is vastly different. And that's that. 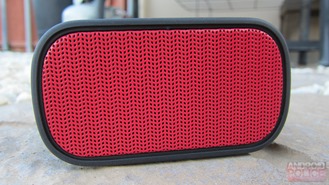 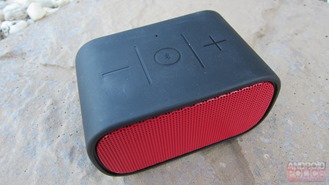 Since we've already established that it looks and feels exactly like the Mobile Boombox, I'm just going to give you the long and short of the build quality: it's solid as hell. The top is where you'll find the controls for volume and Bluetooth, and the back sports the power button, microUSB charging port, and 3.5mm input jack for wired playback. Both sides are adorned with UE logos. That's pretty much it. It's simple and it works. Unfortunately, there's no battery indicator light, just like with the Mobile Boombox. 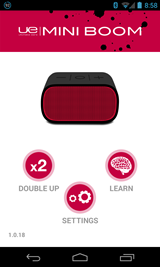 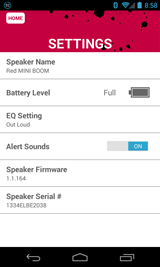 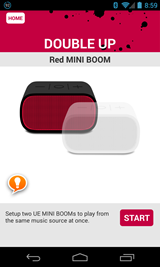 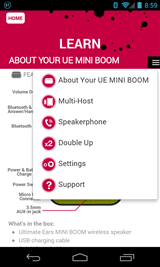 When it comes to features, the MINI BOOM is basically in a league of its own for a speaker this size. It features NFC pairing, can handle up to two connections at once, and remembers the last eight paired devices. As I've already mentioned, it also has the same Double Up feature found on the BOOM, which allows two devices to be paired and function simultaneously in either double or stereo modes by using the MINI BOOM app. Like with its big brother, this feature worked flawlessly.

The app also lets you change audio profiles (more on that below), rename the speaker, check the remaining battery capacity, and find out firmware version/serial number information. 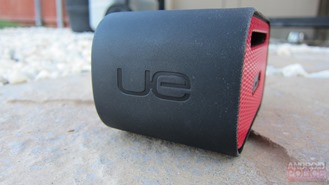 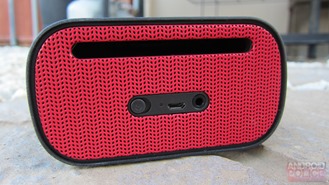 One feature you'll find on the BOOM that didn't make its way over the MINI BOOM, however, is its splash resistant coating. Sorry guys, can't get the MINI wet.

Lastly, let's talk about battery life. The MINI BOOM is rated for 10 hours of battery life and, no surprise, it delivered that. I was able to use both MINI BOOMs in stereo mode at my desk for an entire workday (and then some) without issue. If you run it at full volume, however, the time is going to be shorter, perhaps by two hours or so. Still, a solid eight is nothing to scoff at. 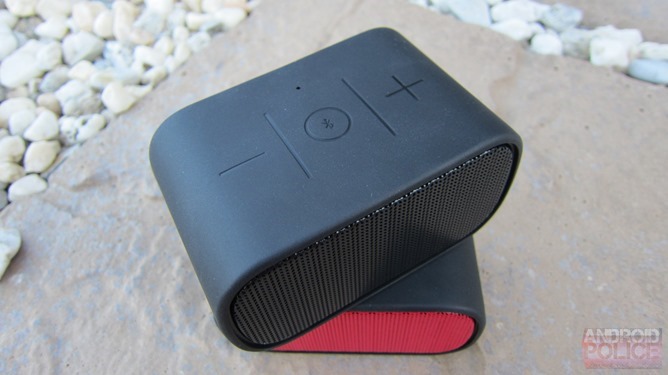 In the area of sound quality, the UE BOOM is one of the best ultra-portable Bluetooth speakers I've ever heard. It's so sharp and crisp, and not lacking anything in the low-end department. Of course, the G-Project G-BOOM recently stole my heart thanks to its combination of low price and incredible sound quality, as well – but it's more of a "boombox" than a portable speaker and doesn't really compete with the MINI BOOM. Anyway, I'm getting off topic.

Given how much I love the UE BOOM, I was really excited to hear the MINI BOOM, and it didn't disappoint. If I didn't know better, I would swear that it's at least twice its actual size, because it doesn't sound small. It packs an unusual amount of low end for its ultra-compact size – it's nice, but not overpowering. The attributes are very balanced across the board, creating a rich, dynamic listening experience. This, of course, can also be tweaked within the UE MINI BOOM app, as that's where you'll find the three sound profiles: Out Loud, Vocal, and Intimate. I found myself using Out Loud for the most part, as it just sounded the best to me.

For such a small package, the MINI BOOM can also put out some volume. Naturally, it's not as loud as its big brother, but that's to be expected. Don't sell it short, however, for its size, it really can push some sound.

Unfortunately, the other feature of the larger BOOM that didn't find a home in the MINI BOOM is the 360 degree speaker – get behind the MINI BOOM, and the sound is drastically dampened. That kind of makes sense, however, as I don't see the use case for each speaker being the same. The BOOM is more appropriate for parties or other social gatherings, where the MINI BOOM makes perfect sense on the desk or other intimate environments. 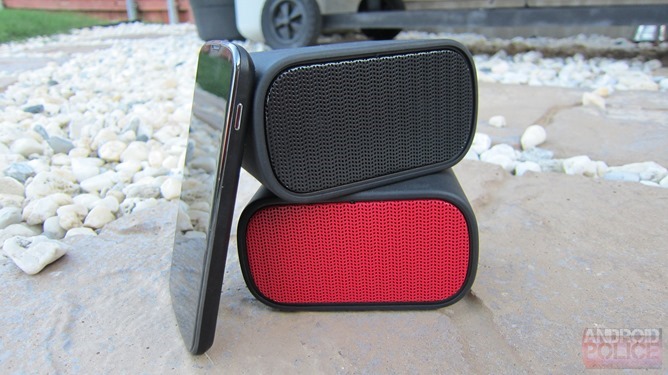 In my UE BOOM review, I recommended the Logitech UE Mobile Boombox to anyone looking for an extremely lightweight and ultra-portable speaker. Today, that recommendation changes. The UE MINI BOOM is superior to the Mobile Boombox is basically every audible way, and it comes in at the same price point. Thus, my new recommendation is the MINI BOOM – there's really nothing to not love about it. It sounds and looks great, has good battery life, and is small/compact enough to take essentially anywhere.

At $99, I don't think the MINI BOOM is overpriced for its intended use. With that said, if you only have a Benjamin to spend and want the absolute most for your money, it's hard to ignore G-Project's G-BOOM. Of course, it isn't ultra-portable and its battery life isn't all that great, so that's also something to consider. If ultimate portability and sound quality is what you're after, however, look no further than the UE MINI BOOM.

Update By request, here's a quick comparison between the speaker on my Nexus 4 and the MINI BOOM.