One of the best things about Android is the degree to which the system can be customized. That extreme level of customization has allowed the community to create some pretty stunning themes that can be applied to almost any device. It's easy – all you need is a new home screen, some backgrounds, some icon packs, a few additional widgets, maybe some skin files, some other odds and ends, and lots of patience. Yeah… that's actually not very easy, come to think of it. MyColorScreen's new Themer app aims to make the process of running a complex theme a simple one-click process.

I've had a chance to play with an alpha version of Themer for a few days to see how it works. So, is this going to bring killer themes to the masses?

When you're applying one of those complicated themes manually, you need a robust third-party launcher like Nova or Apex. The Themer app is essentially a package that includes its own launcher tied into the Themer settings and widgets. You just set it as your default, and live life entirely in MyColorScreen's world. 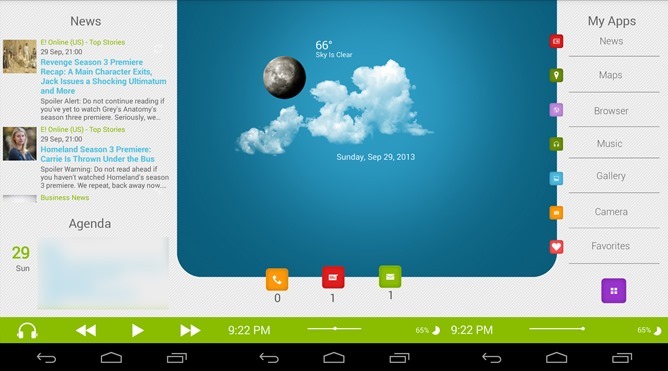 Most actions are accessed by long-pressing in an open area of the screen. From there you can jump into the settings or make some basic tweaks to the currently selected theme. There are about 50 themes currently available in Themer, and several of those have been added just in the last few days that I've been using it. You can page through until you find something you like, then just tap Apply. That's it – really.

In addition to the launcher, Themer has a few widgets that are automatically incorporated into the themes as you apply them. There's RSS, Reddit, calendar, dialer, clock, and an all-purpose widget called the "Everything Widget." You can configure these as you like in each theme, or even add new home screen pages with more widgets (regular and Themer). 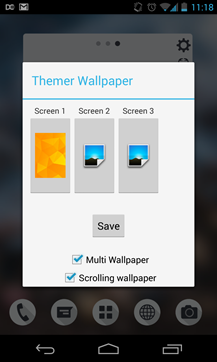 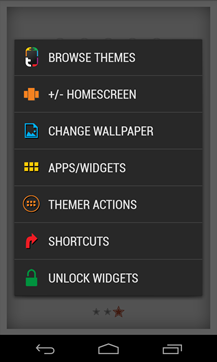 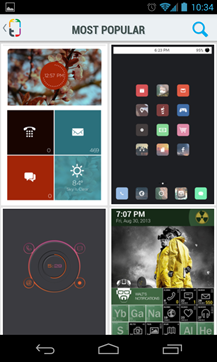 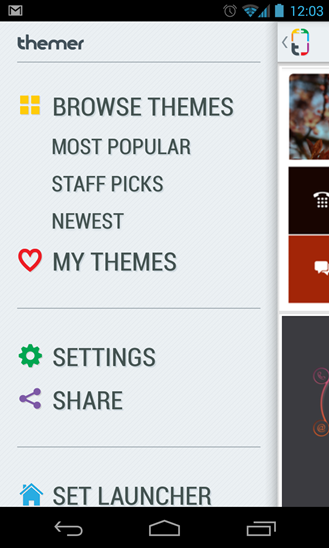 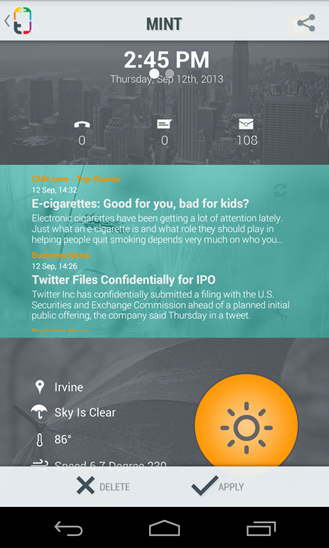 Themer also has built-in icons and groups. For example, many themes come with folders of games, financial apps, and others. When you open the folder, you get some pre-populated apps with neat icons. You can actually pick which app these will link to. So for instance, the first time you press the mail icon, Themer will ask if you want to use Gmail or some other app for that icon. Make your selection, and Themer saves the setting in your Google account.

The place you go for new themes also contains the full Themer settings so you can change the way your home screen behaves. If you want to show/hide the status bar or change the grid size, that's where you go.

Keeping in mind this is not the final version of Themer, it's fairly impressive. The process of going through and picking themes is super-easy. You've probably salivated over some of those slick, minimalist interfaces people are always coming up with – we've even posted about some of the coolest ones. However, the complicated setup stops most people from investigating further. You really want this to be easy, because let's face it, some themes look great but are totally impractical for day-to-day use. You certainly don't want to spend 30 minutes setting up a theme only to realize it doesn't suit you an hour later. 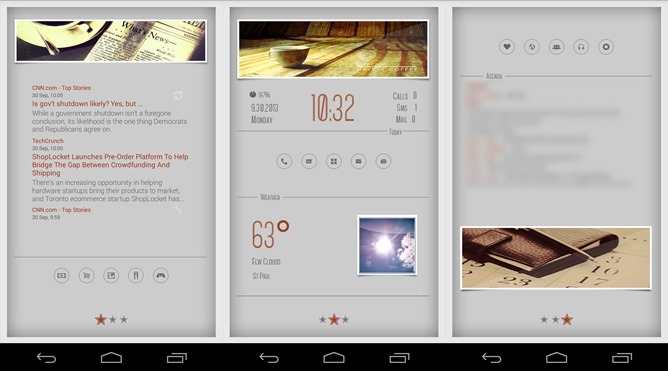 The big win here is that Themer has the potential to bring awesome themes to more users. Instead of configuring multiple widgets, changing icons, and loading overlay skins, Themer just plugs in its own widget settings automatically. It works perfectly in most cases, even with this early version. The robust widgets even let power users modify and build interesting new things.

The basics are all here and it all works, but because this is a new launcher you're going to have to make some compromises coming from something like Nova. There are some advanced settings, but you'll lose things like swipe gestures, multiple docks, and extra scrolling effects. I suspect more features will be added later, but it's something to be aware of. 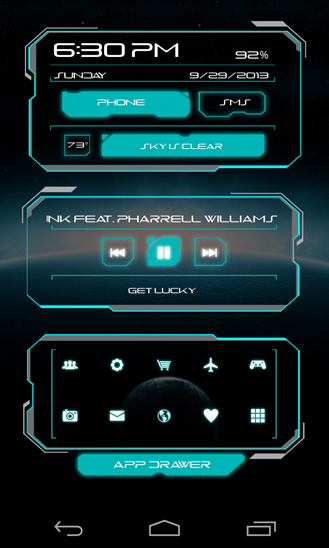 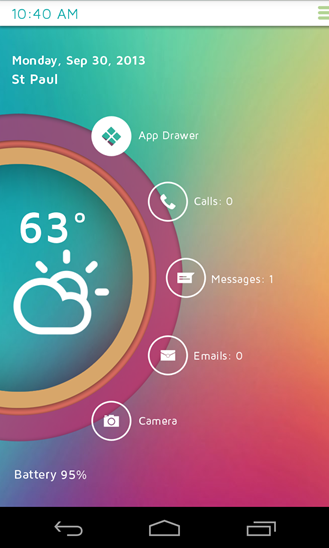 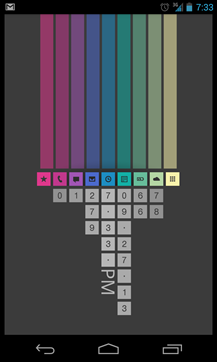 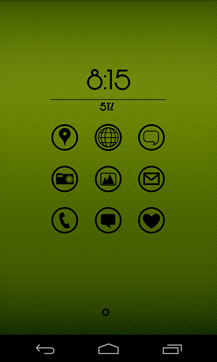 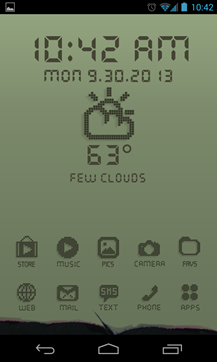 Building your own widgets also takes some time to work out. The tools are powerful, but it's not always clear how to accomplish what you want. As the app evolves, I anticipate the features will be much more refined. In the same vein, the default apps for the Themer groups aren't very easy to configure – I'm not keen on having to remove a Candy Crush Saga icon from the game folder every time.

There are still some bugs and unfinished bits, but you have to expect that with pre-release software. The wallpaper sometimes acts up, and widgets settings don't always work. This is stuff that can be worked out, though.

The bottom line is this: many of the themes in MyColorScreen's Themer are gorgeous, others are a little tacky, and some are both gorgeous and functional. This app makes it so easy to flip between themes that you'll want to try different ones. If they don't work out, you haven't wasted time and energy painstakingly configuring anything. 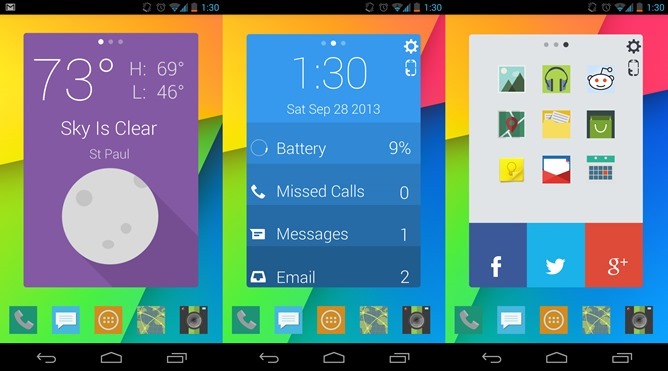 Even though Themer doesn't have quite as many features as a fully custom theme, I suspect it's going to be perfect for a lot of users who want to spice up their device with a new look. I can't wait to see how this app evolves.