Since CyanogenMod became Cyanogen Inc., we've been anticipating a quick and easy CM Installer that would make flashing to the "CyanogenMod experience" fast, simple, and less "hideous" than the current process.

The CM team is currently canvassing G+ for usability testers, with the stated goal of taking the process of installing third-party ROMs (specifically CyanogenMod) and streamlining it, making it less intimidating and more accessible to more users.

After running through the installation process for myself, I can confirm that it does just that. The process is exceedingly straightforward, requiring just a few interactions along the way. Let's take a closer look.

The CyanogenMod Installer app is dead simple, and looks great to boot. Weighing just 105KB in its current form, the app will guide you through switching on PTP mode, then referring you to beta.get.cm (which is currently password-protected for testing). 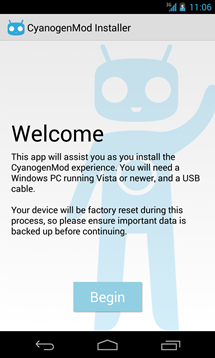 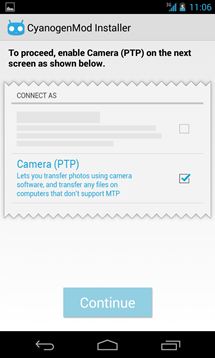 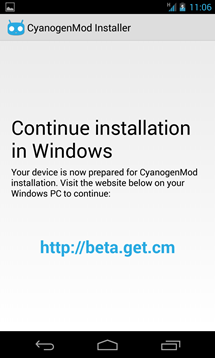 Once you're there, you'll download the PC installer package.

So far, the PC side of the installer is only available for Windows. The CM team has indicated that a Mac version will follow, with a Linux version planned if there's enough demand. Like its Android counterpart, the Windows app is super simple to use. Basically, you just need to download the installer package, let it download recovery files, the appropriate CM ROM, and system applications, and plug in your device.

The app will do the rest, rebooting, loading, and flashing everything you'll need. Most of your time during this process will be spent watching various progress bars come and go.

Interaction across the Windows and Android apps is at an absolute minimum (click a few buttons, let your phone know you do in fact want to unlock the bootloader) and that's a good thing.

Currently, going from stock to flashing a custom ROM is easy enough for those willing to spend some time learning about it, but the process leaves a lot to be desired in terms of user experience. CyanogenMod's goal here was to keep things simple, and so far they've succeeded brilliantly with the CM Installer.

I shot a quick video of the process (editing down to exclude download time). Check it out below (I apologize in advance for my Vaio sounding as if it's going to blast off into space).

It's worth keeping in mind that the installer is still in beta. As super simple as it was for me, some members of the testing group are reporting a few issues, mostly with drivers – but that's good. Cyanogen Inc. obviously wants to get this installer right before it's released. If its current state is anything to judge by, it's going to sparkle when it's finally made more widely available.

Right now, the list of devices allowed to use the app is fairly short, constrained to those devices CM has in-house, though testers with different devices are encouraged to speak up, as the team "can likely enable [other devices] pretty easily."

If you're itching to try the installer yourself, indicate your interest on Koushik Dutta's G+ post linked below.