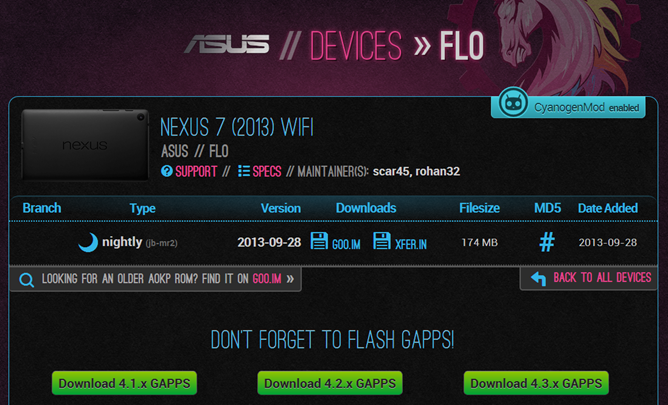 AOKP has also added the WiFi version of the Nexus 7 2013 and the Oppo Find 5 to its lineup. The Find 5 has been a popular model with enthusiasts and ROM fanatics, so it's no surprise that it's getting a little love in the form of an official build. Don't forget to grab your Gapps package and perform a recovery backup before flashing.

Oh, and before I forget: AOKP team member and developer Rohan Mathur, AKA RohanXm, posted the following on Twitter this morning.

That statement checks out with the installation counter, if you include a whopping 1.96 million users who are on open source derivatives ("kangs") of AOKP. So if you're running AOKP, you're in good company. Unicorn power!

Update #1: According to Rohan Mathur in the comments, most of the previously-supported devices now have 4.3 (JB-MR2) nightly builds available. The post has been updated accordingly.

And yes the stats page tracks number of users, not installations or downloads as the page states :-) users are tracked the same way they are tracked with AOKPStats, an apk that tracks devices via their hashed MAC Address (Used to be IMEI but we switched to MAC recently)

MOGA Hero Power And MOGA Pro Power Are Available For Pre-Order On Amazon, Shipping In November