Update: We've essentially confirmed the log is the real deal and the dates below are accurate. That makes the colorful KitKat leak from last week almost certainly fake.

With Googlers apparently carrying around updated Nexus phones, the leaks are becoming more frequent in advance of an announcement. This time we have what purports to be a bug report log file and corresponding screenshot from the device. Some of what's revealed jives with previous leaks too. 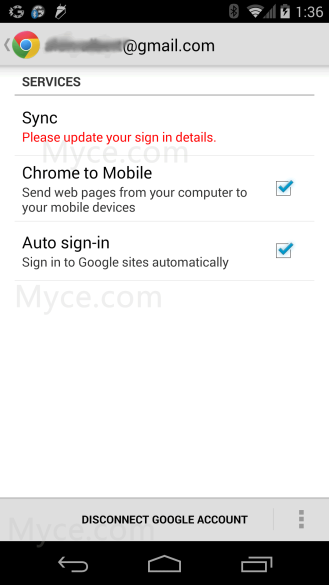 In the screenshot the white status bar icons are identical to the ones in the screenshot Google posted to the Korean Keyboard IME last week (which has since been removed). That screenshot showed a slightly tweaked WiFi signal indicator shape, and the same shape is on display in this new image. Also in the status bar is the same debug icon from last time – a piece of pie with antennae. The other two icons look like Google Authenticator notifications, but they aren't the ones used by the public app – these have a tiny Bluetooth icon overlapping them. The screen itself has a resolution of 1920x1080, and the back button still has that missing pixel in the middle.

This screen doesn't mesh with that suspicious leak from last week with the colorful status bars and transparent nav area. The debug icon is still the pie, and the navigation bar looks pretty solid black. The shape and orientation of the signal icons is also a little different.

As for the log file, only screenshots of a few relevant bits have been released. The entire bug report file from 9/15 is 10MB and contains all logs, specs, and stats from the device (also a screenshot, which is where the above image came from). Since it contains personal information, we might not get access to the whole file. The posted snippets contain listings for Qualcomm sensors, a few mentions of the Nexus 5 name, and the Hammerhead device ID. However, the useragent is still showing as 'Nexus4' at least once in the log file. One line in a different section mentions the wireless charge detection state, but Google is even building that into tablets now, so no surprise there.

The display resolution is listed as 1920x1080, which matches the resolution of the new screenshot and recent rumors about the device. The PPI is supposedly 443, which matches with a screen that's about 5-inches at that resolution.

The software build still shows the "KeyLimePie" ID in a few places, again indicating the secrecy of the KitKat name even inside Google. The build number is KRS74H, which indicates a date around September 13th. Hopefully Google will get around to revealing Android 4.4 running on a new Nexus phone soon – the leaks are coming faster and faster.

[Weekend Poll] A Lighter (White) Theme In Android 4.4 KitKat, Hot Or Not?