If you've been patiently waiting for the Nexus 10 to go on sale before you snatch one up, this may be your best opportunity before Google puts out a refreshed model. eBay Daily Deals (which really seems to love those Nexus tablets for some reason) has once again featured the biggest of Google's tablets. You can pick one up for $319.00,

which is the lowest price we've seen for this model lately. 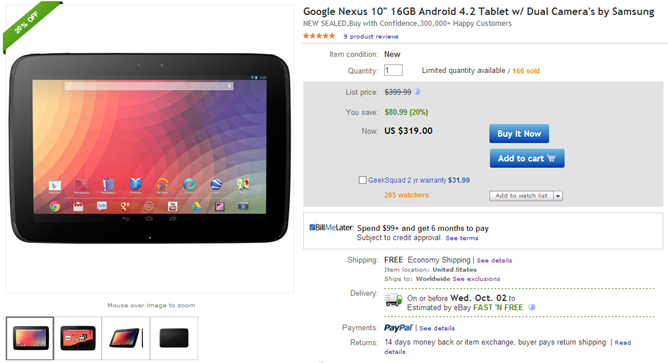 This is a new tablet, not refurbished, and as usual shipping is free to the lower 48 United States. What's less usual is that this seller is shipping to most international locations: only Russia is excluded in the listing. Naturally you'll have to pay a bit extra for international shipping, but honestly, it's pretty great just to see the option on one of these eBay deals. Residents of California will have to pay sales tax, but everyone else will have to carefully and studiously report and submit their own sales taxes to Uncle Sam. (Yes! Said that with a straight face.)

The Nexus 10 may not be able to compete with the latest and greatest Android tablets in terms of raw power, but it's still more than capable, and you're unlikely to find another tablet with that fantastic 2560x1600 screen for such a low price. (For comparison, the brand-new Galaxy Note 10.1 2014 Edition will go for $550.) And it's hard to put a price tag on timely AOSP Android updates. As always, this deal will be limited by stock, so buy quickly if you want to take advantage of it.