As the announcement of Android 4.4 KitKat (presumably) draws closer, the Paranoid Android team has decided to make some changes to the way the popular ROM is managed. On the agenda is a complete rewrite of Paranoid Android with a focus on making a highly stable ROM targeted at fewer devices. That doesn't necessarily mean it won't run on your device, but things are about to change. 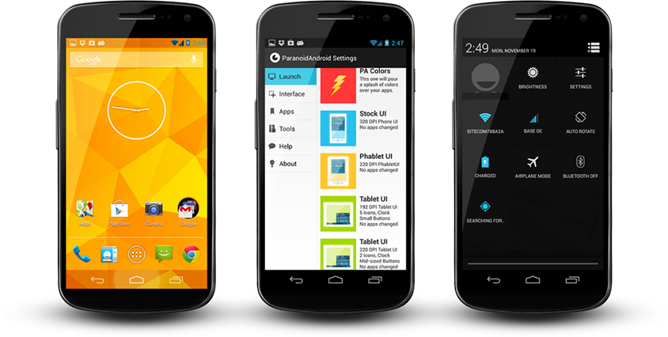 According to the G+ post, the core team has decided to move away from the model of having everyone support individual devices. No matter how skilled a developer is, there are going to be things outside their wheelhouse. So starting with KitKat, the entire team will collaborate on a limited number of devices, one of which will be the Nexus 5. The list of supported devices isn't available yet, but PA will still be ported to devices not on that list – it just won't be done by the main team. As for currently supported devices, ongoing support will be handed off to maintainers.

With everyone doing what they do best, the hope is that Paranoid Android will become a better, more stable ROM. As the refreshed PA takes shape, the team will have an eye toward a more Google-inspired design. The goal is to make something that his Holo-ness Lord Duarte would approve of, while still adding new features. Or as PA put it, less kanging. But don't worry – signature features like Halo and PIE aren't going anywhere.

With a better ROM, the team wants to encourage Android novices to give it a shot with an easier installation and update process (setting up a real website might be a good start). There may even be an automatic installer of some sort that does all the heavy lifting. Now all we need is for Google to announce KitKat.

[New Game] With Giant Boulder Of Death, Adult Swim Does What It Does Best: Hilarious Cruelty