There's good news for frequent international travelers and Fon users alike today. Fon and AT&T have entered into a mutually-beneficial agreement to let each other's users access both networks when out and about. So AT&T International WiFi users will have access to Fon's distributed WiFi hotspots without having to buy the Fonera hardware, and Fon users won't have to pay an access fee on the AT&T WiFi hotspots that still charge one. Cue "It's A Small World After All." 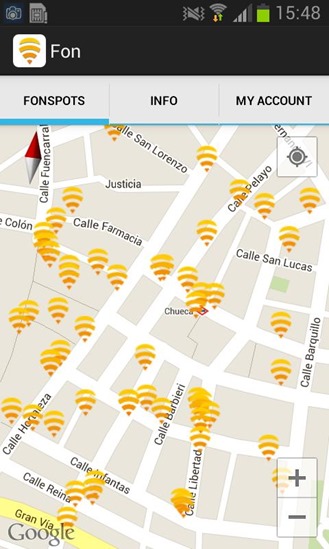 If you haven't heard about the semi-distributed WiFi network Fon, you're in good company - the service has yet to really catch on in America, where cities sprawl out like a pro basketball player in a first-class airline seat. The basic idea is that you buy access with a branded Fonera router and plug it into your home Internet connection. This gives passers-by access to free data (assuming they're part of the Fon network) and you can do the same when you're in range of another Fon hotspot. The Fonera SIMPL hardware is a reasonable $49 and includes some basic network management so that strangers don't have access to your private files or devices.

Fon is primarily a European thing (though there are quite a lot of users in Japan as well) thanks in no small part to Fon's partnerships with BT and Deutshe Telekom, among others. AT&T will be Fon's first major American partner. AT&T customers who've added the Data Global Add-On package to their wireless plans can use the AT&T Wi-Fi International app to find Fon hotspots and connect to them, while current Fon users should be able to connect to AT&T Wi-Fi hotspots through the Fon app.

DALLAS and MADRID, Sept. 24, 2013 /PRNewswire/ -- AT&T* and Fon today announced a global Wi-Fi roaming agreement that will give customers of both companies a broader and richer Wi-Fi experience as they travel the globe.

Via the AT&T Wi-Fi International App**, AT&T customers traveling abroad can now gain access to hundreds of thousands of Fon international hotspots. In turn, Fon network members will gain access to AT&T's Wi-Fi network, which includes more than 30,000 hotspots at popular restaurants, hotels, bookstores and retailers throughout the United States.  The agreement covers smartphones and other Wi-Fi-enabled devices, which will connect seamlessly to select hotspots in both the AT&T and Fon networks.

"We are thrilled to team with AT&T to expand the Fon network in the United States," said Nina Sodhi, CEO, Fon US. "AT&T is a communications pioneer and U.S. Wi-Fi leader, and we are happy to be an important part of their global Wi-Fi strategy."

"Our agreement with Fon further expands our international Wi-Fi footprint making it easier for AT&T customers to stay connected to what matters most during their travels abroad," said JR Wilson, Vice President, Partnerships and Alliances, AT&T Mobility.

** The AT&T Wi-Fi International App, which is available on iPhone, iPad and Android devices, lets AT&T customers on either the 300MB or 800MB AT&T Data Global Add-On package access up to 1GB of Wi-Fi each month at no additional charge. Visit att.com/worldpackages for complete details.

[Bonus Round] Six O'Clock High, Edge Of The World, And Jungle Rampage

Avast Gives Free One-Year Premium Licenses (Worth $15) To Users Who Paid For Theft Aware Before ...