Chinese manufacturer Oppo has been teasing its N1 flagship for some time, and the phone finally became official this morning. At 5.9 inches it sits squarely in the "phablet" category, though there are certainly enough other hardware highlights to turn a few heads. The most interesting is probably the 13MP camera, which sits on a case-mounted hinge and rotates to serve as both the rear and front cameras. It's a design seen before in some laptops and earlier camera phones, but this is the first time we've seen it on a modern smartphone.

The camera will activate upon rotation, and the 206-degree rotation axis has been stress-tested for 100,000 uses. The F/2.0 lens can be manually set for an exposure time of up to 8 seconds. The rear-mounted camera also includes a dual LED flash module. Interestingly, the phone's earpiece sits on the opposite of the camera, so it will actually face backwards when the camera is facing towards the user.

Other specifications include a 1080p resolution on the 5.9" screen, a 3610mAh battery (big, but not enormous for a phone this large), 2GB of RAM, and a 1.7Ghz Snapdragon 600 quad-core processor. That's a little behind the curve for a flagship device, but still pretty respectable. There's also an integrated 12 centimeter square touchpad on the rear of the phone. Oppo's software will enable scrolling, tapping, and shooting photos without touching the display, but it's not clear if full cursor-style control is an option. Other specs include a 9mm aluminum frame and a keychain-style remote shutter that syncs via Bluetooth, which is included with purchase. 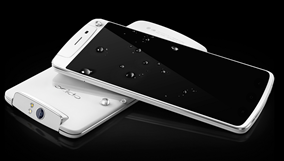 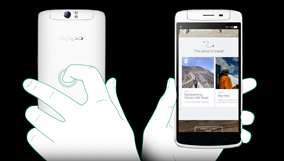 Oppo grabbed headlines by posting a teaser video with Cyanogen Inc cofounder Steve Kondik. The Oppo N1 will launch with Color OS, a highly-customized fork of Android 4.2 for the Chinese market. (Remember that Google doesn't offer its services or the Google Play Store in China). It looks like a pretty standard Android skin, complete with custom icons and widgets. CyanogenMod options will come in the form of a separate hardware edition or a flashable ROM, both maintained by CyanogenMod. 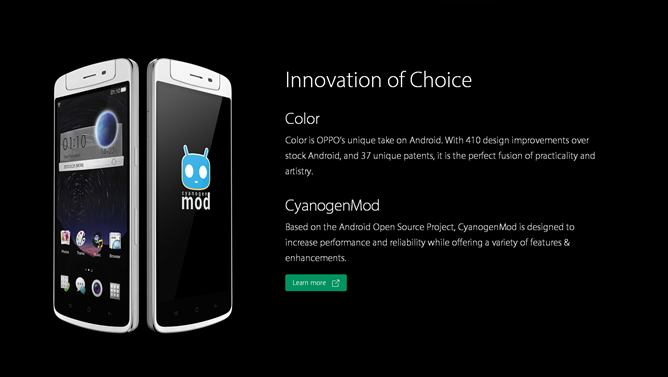 At the launch event in Beijing, Kondik announced that a special edition of the N1 will be available with CyanogenMod pre-installed. That makes the N1 CyanogenMod Edition the first hardware product/partner of the newly-formed Cyanogen Inc. International versions of the Oppo N1 will have Color OS by default, but users will be able to flash CyanogenMod from the stock recovery without modifying the system. 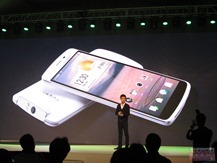 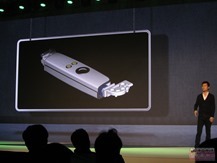 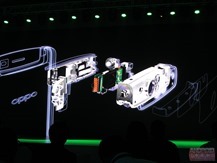 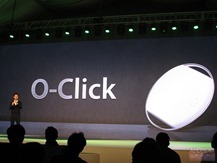 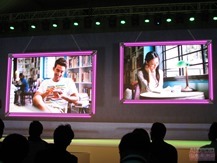 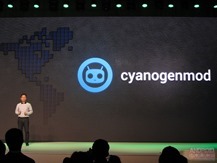 The price will start at 3,498 Yuan, about $570, for the 16GB version. A 32GB model will also be available. The phone will go on sale in China in October, and international models will be available in December.

BEIJING – September 23, 2013 – OPPO today announced the launch of the OPPO N1, the first smartphone from their new N-­‐Lens flagship series. The OPPO N1 was revealed to a crowd of over 600 international press, fans and developers in a stunning visual presentation at the AOYA Exhibition Center in Beijing. With the groundbreaking OPPO N1, the large screen, rotating camera, rear touch panel, and incredible design come together to create a whole new smartphone experience.

The OPPO N1 realizes new possibilities in smartphone photography as the world’s first smartphone with a rotating camera. Its revolutionary camera rotates 206-­‐degrees, and will securely lock at any angle. To help you capture breathtaking and vividly realistic images, OPPO N1 comes with Pure Image, a hardware and software photography solution. Pure Image on OPPO N1 features six physical lenses, an upgraded type 1/3.06 imaging module and f/2.0 wide aperture. Furthermore, OPPO partnered with leading optics companies to tailor make an image-­‐processing solution for improved white balance, exposure and focus. OPPO N1 has a special light-­‐diffusing LED flash design consisting of a normal flash for back facing shots, and a softer, diffused light for front facing shots, with brightness tunable from the OPPO N1 camera software. Your front facing shots will not only be just as good as back facing shots, they will also be perfectly lit. Easily accessible, the OPPO N1 camera will boot from a sleeping screen in just 0.6 seconds via a simple 120° rotation. The OPPO N1 camera also supports long exposure photography of up to 8 seconds.

The OPPO N1 is wound by two finely cut chamfers running along the sides of the device which guard the immersive 5.9-­‐inch display. More than a year of work and over 20 different designs ultimately led to the simple brilliance of the OPPO N1 and the small but intricate camera, tested to last through 100,000 rotations. Its full metal aluminum alloy frame is produced over a 20-­‐day period, during which it undergoes a 14 step polishing process involving more than a dozen suppliers. Strengthening the core of the phone, the frame adds an air of solidity and style to the OPPO N1. The OPPO N1 phone body is made with a smooth, ceramic-­‐like material designed to keep your device free of fingerprints and smooth to the touch.

O-­‐Touch is an entirely new way of using your smartphone. A 12 cm2 rear touch panel makes one handed use for the large N1 screen comfortable and easy. With O-­‐Touch you can scroll, tap, or snap photos – all without your fingers blocking the display.

O-­‐Click lets you remotely operate the N1 camera even when you’re away from the device. Simply position the N1 and step back. If you misplace your device, find it by setting off an alarm on the phone. O-­‐Click fits on your keychain and supports a range of up to 50 meters, staying connected to your OPPO N1 via Bluetooth (BLE).

Available in 16GB or 32GB internal storage, the OPPO N1 is set to launch in early December.