In case you haven't noticed, fantasy sports is kind of a big deal. You can't get through a single NFL broadcast without being bombarded by fantasy-flavored reports, analysis, and even advertising (including this commercial being shown every single break). The link for "Fantasy" is the first thing on NFL.com - not tickets, not NFL Network subscriptions, not overpriced jerseys. In that context, the official NFL Fantasy App Advisor makes a lot more sense. 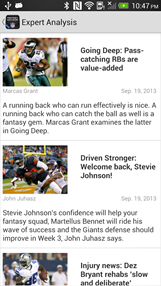 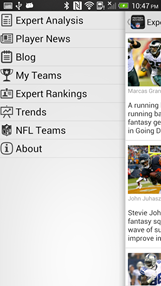 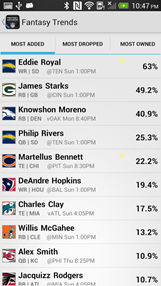 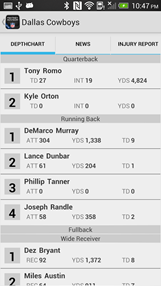 This isn't the official tie-in app for the NFL's branded fantasy football service - that's this one. Neither is it the first fantasy-themed assistance app to come from the NFL; Fantasy Cheat Sheet is available in both standard and HD flavors. No, this app is just a hub for the "experts" of Fantasy Football, or more accurately those that the NFL has deemed experts for its fantasy service, to advise players. You also get the standard news and updated stats (which you can get anywhere) and projections of who you should keep an eye on for your team. The app can keep track of fantasy teams, but only those that use the NFL service, which you're probably already doing if you're an active fantasy player.

So what does this app offer that you can't get elsewhere? A cynical observer might note that it offers an extra three bucks in the National Football League's already-bulging coffers, but it does let you look at data for the most added, dropped, started, and benched players. Again, that's limited to the fantasy teams on the NFL's servers, but it's pretty valuable information if you're trying to stay ahead of the curve in your fantasy league. Valuable enough to pay $2.99 for, on sale I might add? I'll let you be the judge. NFL Fantasy Advisor is available for all devices running Android 2.3 or higher.

[Weekend Poll] Are You Interested In The Oppo N1 For Its Official CyanogenMod Support?