Sony's Xperia Z1 (nee "Honami") made a bit of a splash at IFA in Berlin a few weeks ago. The phone's focus on high-quality imaging via a 20.1 megapixel camera, combined with the undeniably slick high-end industrial design that Sony has been putting out for the last few years, has already earned it a few fans. As usual, Sony has posted the required open-source kernel files for the new device to their developer website, this time before the hardware is actually available for purchase. 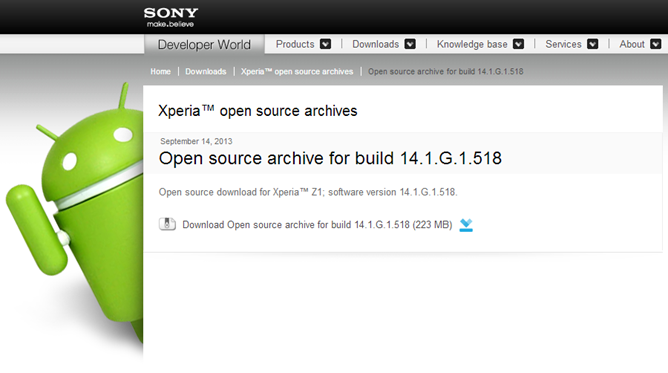 The Z1's other charms include a 5" 1080p screen, Snapdragon 800 processor, 2GB of RAM, and 16GB of storage plus a MicroSD card slot. The battery is relatively spacious at 3000mAh (a full 30% larger than the older Xperia Z), and the body uses the same waterproof aluminum and glass design with the mid-mounted power button and physical camera shutter. The phone is set to go on sale worldwide later this month; a price hasn't been set yet, but "high" is a pretty safe bet. You should check out our hands-on with the Xperia Z1 from IFA.

Sony has never made its phones difficult to root or modify, with the exception of a few carrier variants. On the contrary: they've actually encouraged developer tinkering, even building custom AOSP ROMs for some of their devices and releasing them publicly. If the pattern keeps, the bootloader in the Xperia Z1 should be unlockable by end users without too much difficulty. The kernel files posted here will allow developers to create custom ROMs and the like. Since the Xperia Z already has a healthy modding community behind it, you can expect the Z1 to follow suit.

The Moto X Developer Edition For Verizon Is Out Of Stock, GSM Version And DROID MAXX Developer ...