Last month, Geek.com's Russell Holly reported that ASUS would be crafting the next-generation Nexus 10 rather than Samsung, the manufacturer who brought us the first iteration of Google's ten-inch tablet.

The report was followed quickly by the rolling back of WSJ's Amir Efrati's previous statements, and relied on "multiple sources," among them a screenshot from Best Buy's internal inventory system.

Today the claim was given a bit more credence, with a PCWorld inventory screen snapped by PCWorld employee @Rage06 surfacing on Twitter. 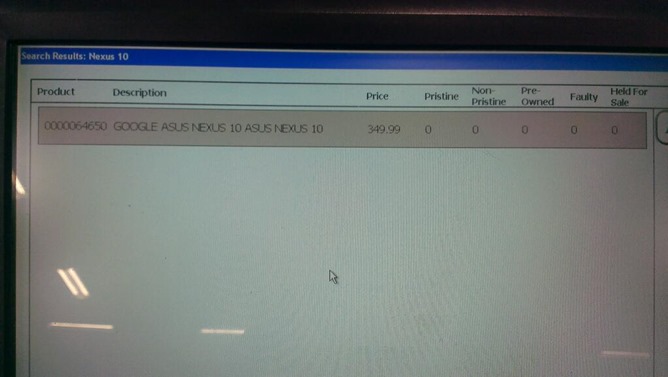 Some of you may remember that @Rage06 (handle RaY) came forward with pricing and PCWorld availability for the 32GB Nexus 7 last year that ended up being correct. This time around, the inventory system indicates a £349.99 price point for the next N10.

Of course, we still can't be 100% certain that the next Nexus 10 will be ASUS-made, but it is looking pretty likely at this point. This would be an interesting move since, in recent memory, Google has stuck to a two-iteration-per-manufacturer pattern with the Nexus program (Samsung's Nexus S and Galaxy Nexus, ASUS' two Nexus 7s, and – if the leaks are accurate – two Nexus phones from LG). Then again, no one said this pattern was intentional.

All we can do for now is wait for either an official announcement or more leaks. Either way, we'll keep you posted.