Google's next flagship phone is simply refusing to stay under wraps. After showing up in Mountain View's KitKat statue unveiling, it then swung by the FCC after being mistakenly attached to the Verizon LG G2 documents. Now it has shown up in two short video clips and a few still photos which appear to have been taken at a party or bar of some sort. A Googler seems to have left his or her phone sitting around charging while some sketchy folks were about. Bad for the Googler, but at least we get a tiny glimpse of the next Nexus. 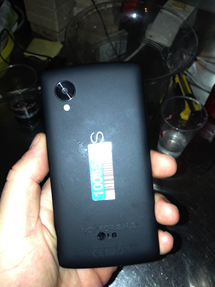 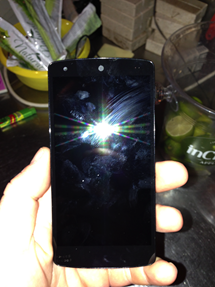 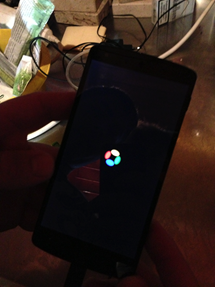 The back has the same landscape Nexus logo (with a sticker obscuring most of it) we saw in the video – not the dummy back from the FCC. There's an LG logo clearly visible at the bottom, and it's not glass. The cheers are audible. It looks like a soft-touch plastic similar to the new Nexus 7. That ginormous ring around the camera is still there, though. On the front, the device has a camera at the top left. The proximity and light sensors appear to be on the right. As for that mysterious white dot? It's still there, but it's still not clear what it is. Maybe an LED? There is no visible speaker, so maybe it's a really bizarre earpiece cover. This might not be final hardware, but there are regulatory markings on the back.

The videos (with NSFW language, by the way) show a tiny bit of the device powered on. The people handling it clearly don't have the pattern lock for the phone. The clock font is now all regular Roboto, rather than having the odd bolded hour place. Another still photo also shows a boot up animation similar to the Google Play Edition devices. The signal icon looks white in the first video, but it's blue in the second. That would fit with typical stock Android behavior for a device that is connecting to the internet. The battery icon looks white, but it's almost empty. We can't tell from this leak if the icons will change color, as has been rumored.

So we can be fairly certain Googlers have the device for testing, which means it's getting close to finished. There's very little to see on the software side in this leak, but it's still the best look we've gotten at the next Nexus. 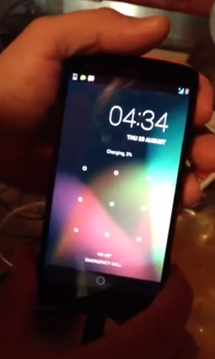 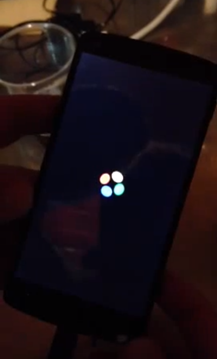 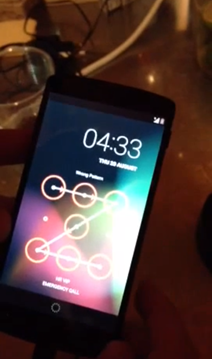 Some screens from the videos, in case they are removed

[Hands-On] Ark Mail Can Pull Up The Social Network Profiles Of Anyone Who Emails You, It Just ...