The increasingly misnamed Final Fantasy series of role-playing games has been around for just shy of 26 years. In that time it's spanned the gaming spectrum from undeniable classic (FFIII and FFVII) to forgettable mess (pretty much everything since X-2), but it remains the unstoppable juggernaut of the Japanese RPG scene. Now Square Enix (that's Squaresoft for those of you who remember the days before the Xbox 360) is hoping to cash in on your nostalgia with Final Fantasy All The Bravest, a simplified RPG that combines the "endless" style of play with the company's rich intellectual property.

You start out with a few basic characters and some easy bosses. The story is simple, or perhaps more precisely, nonexistent: use the characters to kill the bosses. That's it. There's no real exposition or plot, no overworld, no goal - fight increasingly difficult bosses with a modified turn-based battle system. The controls have been streamlined (read: dumbed-down) into a set of simple swipe-based commands that allow you to roll with the punches once your party members are ready to attack. Once every three hours a frenzy mode will be unlocked and you'll be able to attack as quickly as your fingers can fly. Kill the bosses and unlock more basic characters from Final Fantasy's backlog of basic jobs (classes), which can be swapped in and out as you unlock more party member slots. At higher levels your party will include more than a dozen characters. 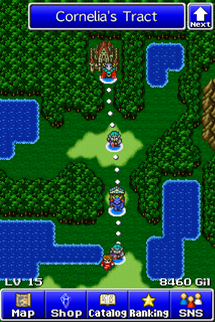 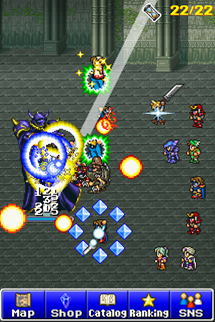 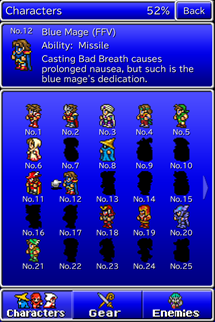 Final Fantasy All The Bravest is a free download, so you're probably wondering, "where's the catch?" In-app payments can unlock 35 "premium" hero characters from the Final Fantasy games, each with a unique look, equipment, and attack. All the big names are included, which I'd list off here if I actually knew what they were (I can recognize effeminate poster boy Cloud from FFVII, and that's about where my knowledge of the series runs dry). But here's the gotcha moment: the purchases are randomized, kind of like the individually-wrapped toy collectibles that seem so popular in Japan. The only way to ensure that you'll get the ones you want is to keep buying them, possibly until you've got all 35. Ka-ching. You can also buy extra battle stages from Final Fantasies VII, X, and XIII.

The art style is ripped right out of the SNES-era games, which might be interesting if you really want to see characters from the latter games translated into pixels. Unfortunately the initial release of the game seems to be broken on a wide variety of devices, including the Nexus 4, Nexus 7, and my daily driver DROID RAZR M. This isn't really a surprise - Square's Android games are usually pretty rocky for several weeks after being posted to the Play Store. Square's company policy: if it ain't broke, don't fix it. If it is broke, repackage it with a new subtitle and sell it again. At least this one is a free download.