Most of the Bluetooth speakers that we review here at AP fall into the portable category (with the exception of this one). Since portability isn't a requisite on everyone's "I need this in a Bluetooth speaker" list and some users may just want a standard set of wireless speakers for the desk, we decided to venture out and take a look at Logitech's sexy new Z600 desktop Bluetooth speakers ($150, Logitech). What makes this set unique is that it can pair with and connect to three device simultaneously, making it extremely easy to pull audio from multiple devices – simply pause one and hit play on the next. To add even more convenience, the Z600 is also cross platform; it works with Windows, Android, iOS, OSX, and any other Bluetooth A2DP-enabled device.

With the basics out of the way, let's dig in.

First and foremost, this is a sleek- and modern-looking set of speakers. The understated and out-of-the-way design make them feel more like a design element than an actual utility, which is incredibly nice. They look absolutely fantastic on a desk. 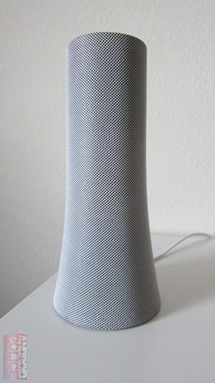 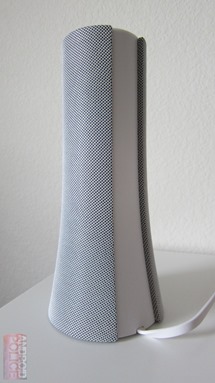 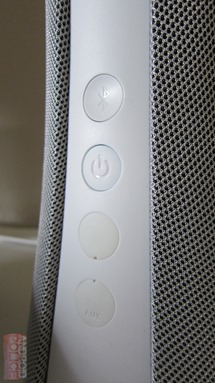 Each speaker features a "lay-flat" cable design that keeps the cables as minimal and unnoticeable as possible; the two cables (one from each speaker) meet in the middle at a small junction box of sorts. The power cable is then connected to said box. As well-designed as the speakers are, however, the AC adapter for them is massive. If you plan on plugging into a surge protector, be ready for this big ol' brick to take up at least two spaces. Thus is life, I guess.

Past the overly-large plug, everything else about the speakers is incredibly sleek. The right channel houses all the controls – a very simplified set, I might add – while the left channel is free of any sort of buttons or knobs. Speaking of, you actually won't find a single knob on the set at all – the volume is adjusted via a touch control on top of the right speaker. Simply rotate your finger around the outside portion of the speaker top and the volume changes – clockwise to increase, counter-clockwise to decrease. It's very cool, but can be touchy and a bit tricky to get used to. The back of the right channel is where you'll find the rest of the controls: power, Bluetooth pairing, and a 3.5mm input jack for non-Bluetooth devices. The unit ships with a Bluetooth dongle for PCs, so the 3.5mm input is really just there for older MP3 players and such. 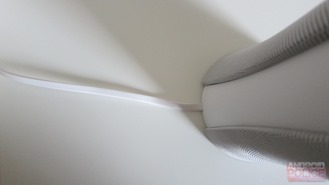 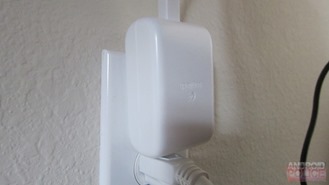 While the overall look of this set is fantastic, it really shows its stuff when it comes to device pairing, connection, and audio handoff. One of its best features is the ability to connect to up to three Bluetooth devices at once, which is probably one of the biggest reasons that anyone would be considering buying this set. This feature works flawlessly – the audio handoff between devices is nearly instant since all three are connected at the same time, but you never have to worry about devices playing atop one another. If one device is sending audio to the speakers, it will deny the other two. It's absolutely brilliant. Logitech nailed it with this feature.

So we've talked about how visually impressive this set is, along with how well the features work. But all that amounts to nada if it can't deliver good sound. Fortunately, you've nothing to worry about with the Z600 – it delivers a crisp, clear audio experience that works well for most genres of music. With that said, it's definitely lacking some of the low-end that I personally would like to hear in both music and movies/videos – especially at high volumes. When cranked, any definition in the low end just jumps out the window and it becomes an audible assault of treble and mids. That can really dampen the experience if you often crank your speakers to 11 and are expecting some oomph in your face.

And really, that's the biggest drawback of an otherwise excellent set of speakers. If this pair shipped as a 2.1 set to add some extra bass to the mix, it would provide a much better experience, especially for those who seek that defined low-end and use a Bluetooth device as their primary source of music.

That said, I've been using the Z600 as the primary speakers on my desktop for about a month now, and I've had zero issues adjusting to them for most things. Basically, if you're looking for some wireless speakers for casual listening and/or videos and movies, the Z600 fits the bill nicely. But don't expect them to rattle the walls, because that's not going to happen. 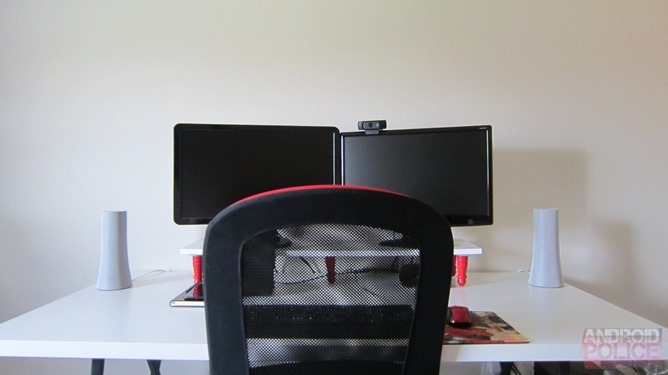 Yes, that's really my desk. And yes, it's always that clean.

In a market filled with more Bluetooth speakers than you can shake a stick at, the Logitech Z600 really stands on its own. It's designed to be a "permanent" fixture in your house (opposed to a portable unit) and offers seamless transitions between multiple audio devices on the fly. The set looks fantastic with essentially any décor (though it definitely leans more towards a modern design), making it both stylish and functional.

If you're a fan of massive lows, then this set – pretty as it may be – probably isn't the best choice. If you're just in the market for a sharp-looking set of speakers to deliver some casual tunes and that works well for catching a flick or videos on YouTube, then this set is one to consider. If, however, you want something to put in any room of the house that can pair with multiple devices, you'll be hard pressed to find something more fitting than the Logitech Z600.