If you're using a stock HTC One from the Google Play Store, check your phone's notification drawer. Go on, check it. I'll wait. If you're one of the lucky few, you may be seeing a special surprise in the form of a software update. At least one XDA Developers member got the update to version 3.07.1700.1 earlier this morning, though he was using a standard model One that he'd soft-converted into a Google Play Edition. 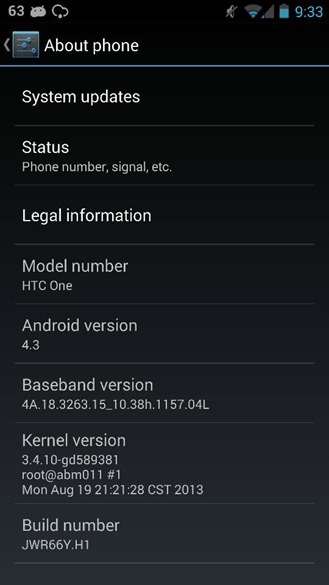 We're not sure exactly what's in this update, but the build number is marked JWR66Y.H1, indicating that it's probably the same small bump that Nexus devices started receiving in late August. The kernel build posted by the XDA user is marked for August 19th. (That's about three weeks between the Nexus release and the Google Play Edition release, if you're wondering - not bad.) It looks like the wider download is just starting, so it could take several days to a week to hit all of the US-based users of the HTC One Google Play Edition.

JWR66Y is a small security update, so don't expect any user-facing changes to your Android 4.3 build. If it's similar to the previous Nexus releases it should be less than 5MB in size, and we don't yet know how it will affect those with root privileges and/or custom recoveries.

Qualcomm And The Amazing Technicolor Dream Box: Chip Maker Teams Up With Color Company For ...