Update: This offer sold out as quickly as we could get it up. Apparently there were only 750 tablets available, and all of them are already gone. $30 off is nothing to shake a stick at.

At $229, the 16GB 2013 Nexus 7 is already a good deal, perhaps the best one you're going to come across if you're looking for a brand new 7-inch tablet. That is, unless you happen to come across that same $229 tablet on sale. Today eBay is offering the 16GB version of new the Nexus 7 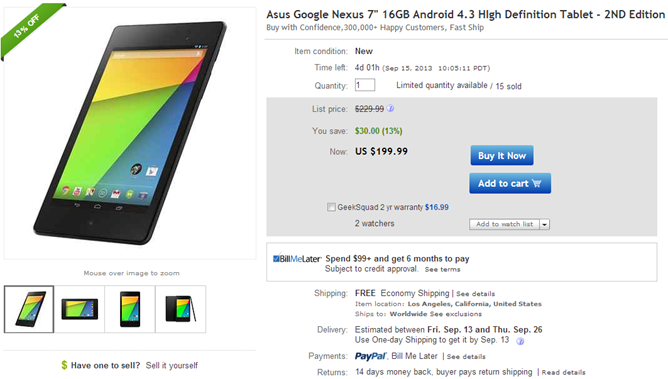 Standard shipping is free to the US, but faster shipping is still an option. If you live in California, expect an 8.75% sales tax. Everyone else can get their hands on one of these tax-free. There are only a limited number available, so this isn't the time to wait around if you think you're interested.

That said, this isn't the first time the 2013 Nexus 7 has appeared on eBay Daily Deals. We last posted this deal less than a month ago when the 16GB model was on sale for the same amount. You could wait on this, but do you really want to roll those dice?

What We Use, 2013 Edition: The Apps, Tools, Devices, And Other Stuff Ryan Can't Do Without