Verizon, AT&T, and T-Mobile have all gotten their houses in order for the launch of LG's new flagship, but Sprint seems to be a bit behind the curve. The carrier has only just announced a pre-order for the G2, and it's October 11th - almost a month after AT&T and Verizon will have the phone on shelves, and a solid two weeks after T-Mobile. Sprint doesn't even have an official launch date for the phone, instead stating in the press release that the G2 will come "in time for the holidays," and that more availability information will be available at a later date. 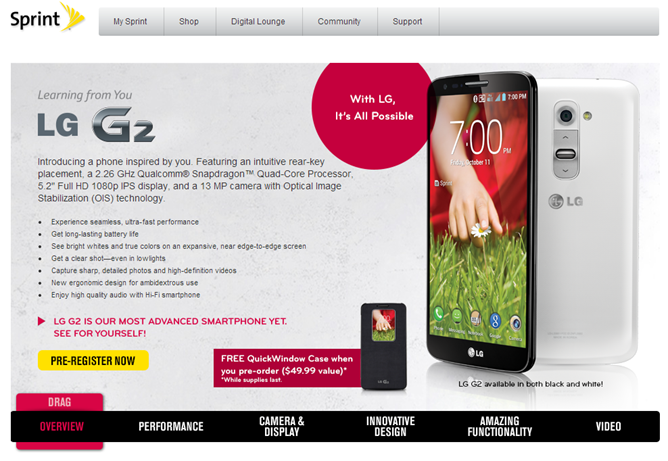 But like the man said, good things come to those who wait. The LG G2 will have the same $199.99 on-contract price as the other members of the Big Four, but if you pre-order the phone from Sprint, they'll include a free Quick Window case (LG's copy of Samsung's S-View semi-transparent cover). The case will retail for fifty bucks, so it's a nice bit of savings if you intended to get one anyway. That might be small comfort to those who are eagerly anticipating the G2 on The Now Network.

The G2 will come in both black and white color options, and so far Sprint isn't showing any garish logos on their version of the phone (cough, Verizon, cough). There's no word on an unsubsidized price, but it will probably be in the same $600 ballpark as the other carriers.

OVERLAND PARK, Kan.--(BUSINESS WIRE)--Sprint (NYSE:S) and LG Electronics today announced the highly anticipated LG G2 smartphone will be available in time for the holidays with the benefit of Sprint’s unlimited 4G LTE data plans1. More information on the availability date will be given at a later time.

LG G2 will be available for $199.99 with a new two-year service agreement or eligible upgrade (excluding taxes and surcharges). New and existing customers can pre-order LG G2 beginning Friday, Oct. 11, at www.sprint.com/lgg2. All consumers who take advantage of the online pre-order will receive a free Quick Window case ($49.99 value) with the G2 device.

LG G2 smartphone customers who sign up for Sprint’s new Unlimited, My WaySM plan or My All-inSM plan are eligible for the Sprint Unlimited Guarantee. The Sprint Unlimited Guarantee gives customers unlimited talk (calls to any wireline or mobile phone), text and data while on the Sprint network for the life of the line of service2. The new Unlimited, My Way rate plans start for as little as $80 per month (excludes taxes and surcharges).

The first U.S. smartphone to launch with the new Qualcomm® Snapdragon™ 800 processor, LG G2 is remarkably thin and light and features a massive 5.2-inch, 1080p IPS LCD display. Along with a processor as powerful as those in many laptops, LG G2 provides features that maximize on-screen multitasking with the simultaneous use of multiple apps. LG G2 is also equipped with 24-bit/192kHz Hi-Fi playback that reproduces studio-like sound quality and a 13-megapixel Full HD camera with Optical Image Stabilization (OIS), giving users the ability to capture crystal clear images while in motion.

LG G2 brings to users an unprecedented smartphone experience and helpful customization features such as:

Sprint continues to bring a better wireless experience to more customers across the country as it builds out its all-new 3G and 4G LTE network and is projected to provide LTE to 200 million people by the end of 2013. For the most up-to-date details on Sprint 4G LTE, visit www.sprint.com/network. Customers are also encouraged to check www.sprint.com/coverage often because the maps are updated when coverage is expanded.