Ouya announced in July that it would match funds for Ouya titles that were funded through Kickstarter. That's a pretty good deal, so a number of game developers took a swing at it. There were reports as the first two campaigns neared their goals that something was amiss. There were a number of very large donations, and some felt that screamed "scam." One project has been suspended, and the details are starting to come out. 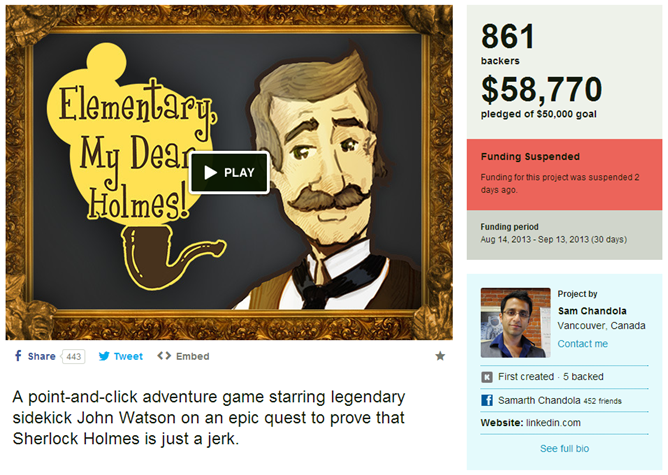 Kickstarter has not yet made a statement regarding the suspension of Elementary, My Dear Holmes! shortly after it reached its goal. The developer has spoken out, though. Sam Chandola from Victory Square Games claims they contacted Kickstarter and Amazon (which handles payments for Kickstarter) after the original accusations surfaced. It was their hope to get the suspicious accounts suspended and continue the campaign, but instead the project itself was suspended. Kickstarter does occasionally do this, even if the malfeasance is not the fault of the developer.

The other game cited in the original accusation, Gridiron Thunder was funded successfully yesterday. Elementary, My Dear Holmes! will apparently still be produced. This point-and-click adventure attracted interest from venture capitalists prior to the Kickstarter campaign, according to Chandola. There is no evidence Victory Square Games or Ouya did anything untoward, but Kickstarter apparently believed there was enough of an issue with the pledges that the campaign had to be stopped.