When it comes time to pull the trigger on a new app, the reviews are typically what make or break the decision. If the app's instable, laden with malware, full of bugs, or is generally all-around janky, the reviews give us a heads up. The only problem is that it's difficult to sift through all the reviews to find the ones most relevant to our needs. This used to not be a problem, but the ability to filter reviews went the way of the dodo following the Play Store's relatively recent redesign. Now they're back. 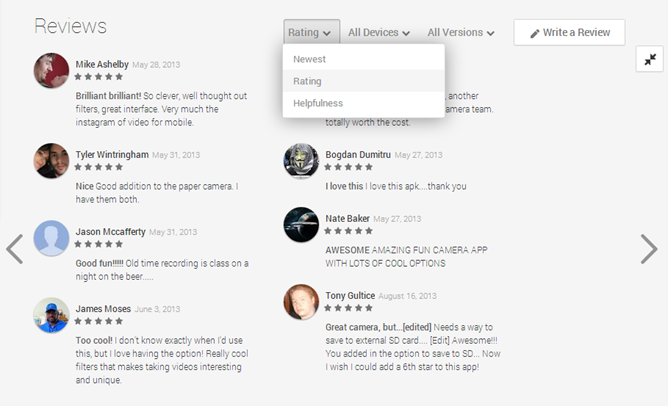 For those who aren't already familiar with the Play Store's review filters, you have the choice to select from three drop-down menus: Rating, All Devices, and All Versions. The first lets you filter between newest reviews, the highest ratings, and which reviews were considered by other window shoppers to have been particular useful.

The "All Devices" tab lets you filter for users who happen to have the same devices as you do. This menu might be useful for owners of a phone like the Nexus 4, but good luck finding another person running a rooted Nook Color to have written a review on your app of choice.

Lastly, we have the "All Versions" filter. This option is the least thorough, as it only gives the option to show all reviews or just the reviews on the latest version. Nevertheless, it might just be the most useful of the three, especially following a recent app update that may or may not wreak havoc on an otherwise solid app.

Now that the filters are back, hopefully Google will take the time to expand on the options available. I would love the ability to see reviews across specific versions, getting a feel for the change in quality of the app over time. This would give me a better idea of how seriously the developers take the app.

But that's me. What filters would you like to see?