Google's a little late with the Android platform distribution numbers this month. It might have something to do with a rather large announcement yesterday, involving a candy bar, a statue, and the announcement of Android 4.4. But the numbers were just posted, so let's have a look at 'em, shall we? 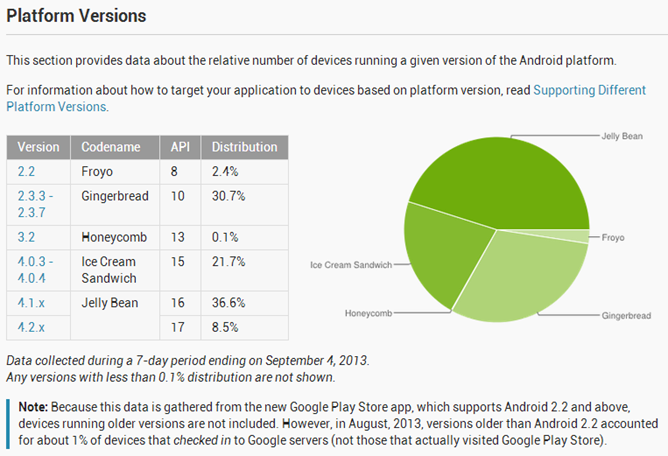 First of all, Android 1.6 and 2.1 have been dropped from active tracking because they don't work with the latest version of the Google Play Store app. According to a note on the Developers page, these two versions accounted for about 1% of devices that checked in to Google Servers, and perhaps even less actually visited the Play Store.

In terms of active users, Jelly Bean got a nice bump in both 4.1 and 4.2 flavors. 4.1 jumped to 36.6% of Android users, a gain of 2.6%, and 4.2 jumped from 6.5% to 8.5% in the last month. All other versions dropped, including a relatively dramatic drop of 2.4% for Gingerbread, finally bringing it under one-third of active users. (Yeesh, that only took two years.) Ice Cream Sandwich dropped less than a point, and Froyo dropped three tenths to 2.4%.

Android 3.0 Honeycomb was flat at .1%, and it looks like Android 4.3 still isn't prevalent enough to break the list. With multiple Samsung devices launching with Android 4.3 in the next month, not to mention updates to existing phones and tablets, we can hope that this will change soon. The Screen Size and Densities chart was also updated, but none of the DPI densities were swayed by more than one half of a percentage point.

Samsung Introduces The Galaxy Note 3 In A Super-Detailed 6.5 Minute Video