Samsung just announced its fall catalog at the Unpacked pre-IFA event. There are very few surprises: the Galaxy Note 3 is here with a new leather-style stitched design, the Galaxy Gear smartwatch, and a revised version of the Galaxy Note 10.1. 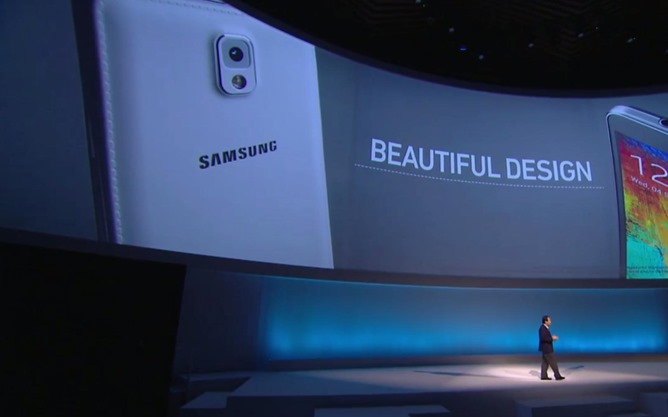 The Galaxy Note 3 is Samsung's new flagship "phablet." It's been given a pretty huge update in terms of physical design: the rear cover is a faux leather, stitched design, combining with the banded sides to make it look like a journal. The shape of the phone is a bit more angular than the Note II as well. The Note 3 will launch in black, white, and pink color options, with a range of interchangeable back covers and flip covers in various colors. 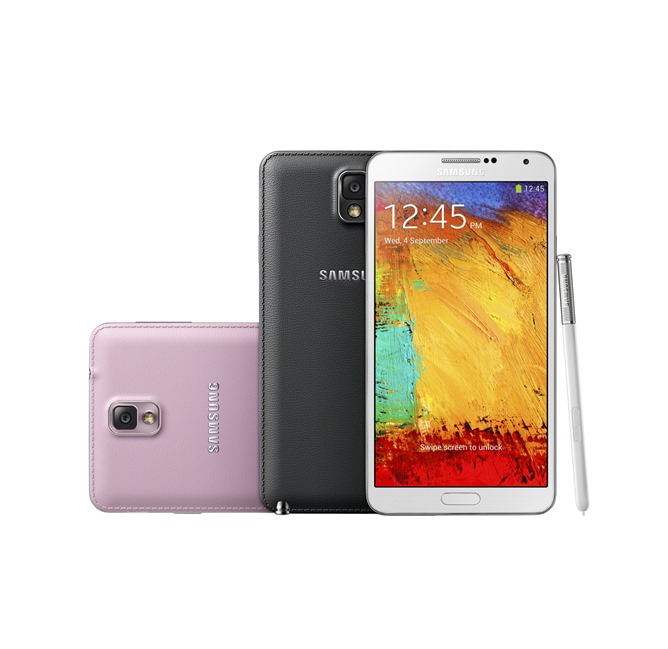 But enough about the looks: let's get down to the hardware. The Note 3 uses a 5.7-inch screen, slightly larger than last year's model but without adding any extra width to the chassis. As expected, the AMOLED screen has been pushed to a full 1080p resolution. Inside you'll find a 1.9Ghz Exynos octa-core processor (though some markets will probably use a Qualcomm alternative, as usual) paired to a fantastic 3GB of RAM. The Note 3 will launch running Android 4.3 plus a ton of new TouchWiz software enhancements - we'll dive deeper into those in our hands-on. Air Command, which opens a sub-menu when the user clicks the S-Pen stylus, is probably the most notable. 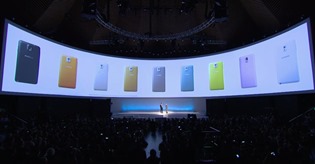 The battery is still removable, and has been adjusted to 3200mAh. Storage options have been boosted to 32GB or 64GB, plus a MicroSD card. The rear camera is the same 13 megapixel model as the Galaxy S4, but now includes the ability to record in 4K. The front camera is 1.9MP. Samsung is also stressing the addition of CAT4 Carrier Aggregation to the Note 3's LTE spec. 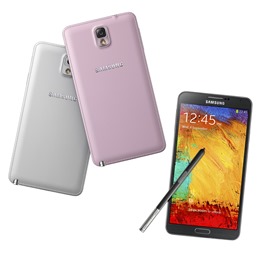 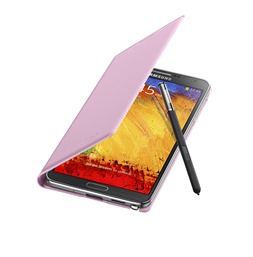 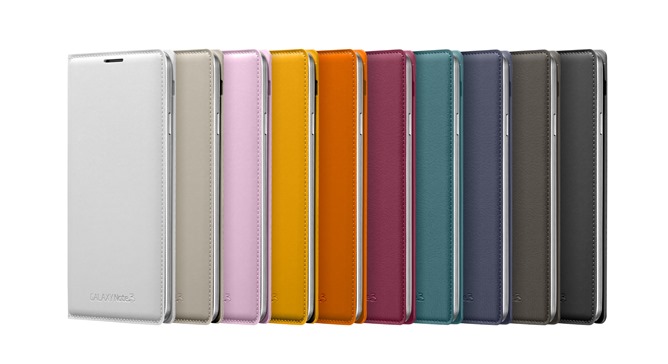 The Galaxy Gear is an interesting take on the smartwatch. It eschews power-saving e-ink and similar screen technologies for a 1.63-inch Super AMOLED with a resolution of 320x320. Samsung says that the watch runs on an 800Mhz processor and uses 512MB of memory, with 4GB of onboard storage. It pairs with Samsung devices (and at the moment, only Samsung devices) over Bluetooth with the aid of NFC and a proprietary app. The main function of the device is as a notification and call extender, and to that end, it includes the ability to answer and place calls from the watch itself. An integrated microphone on the clasp of the strap will allow for speakerphone-style conversation. The Gear will be available in six colors. 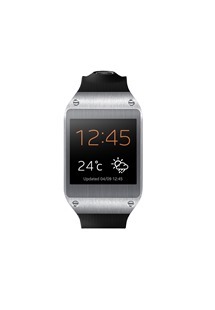 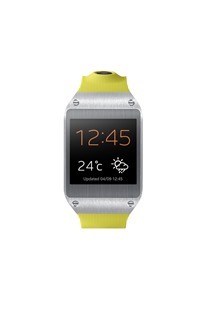 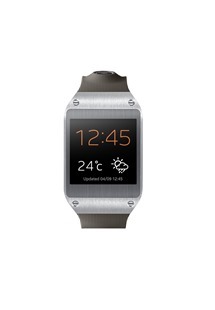 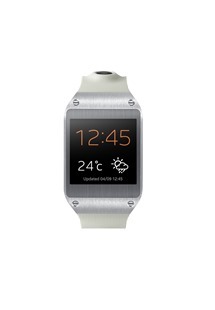 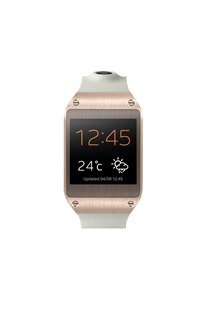 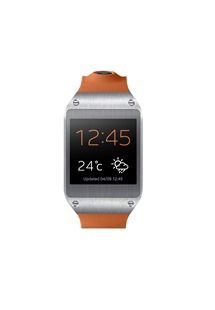 But that's not all. The Galaxy Gear is the first smartwatch (or at least the first one of the current crop set to be released) with a camera. It's a 1.9MP shooter integrated into the strap, pointing out from the body when you're wearing it. You sort of point your forearm towards the subject in a way that seems like it's guaranteed to be awkward. Photos can be uploaded using watch apps or annotated with a voice note. 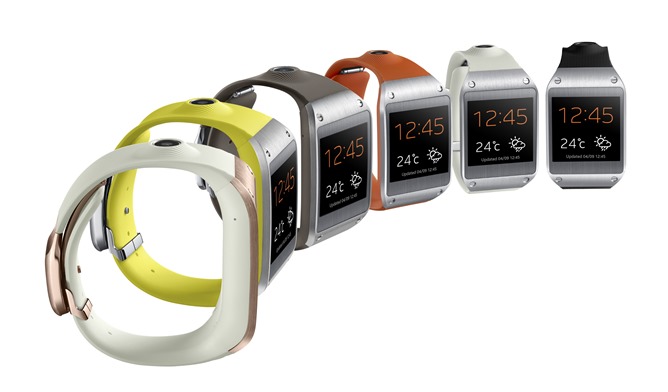 Samsung is including a variety of apps with the Gear, including Auto Lock (locks your phone when it's out of range) and Find My Device. Samsung will provide its own app and allow third parties to develop for the gear, but apps will not be available on the Play Store. Evernote, eBay, and Glympse were all shown running on the Gear. 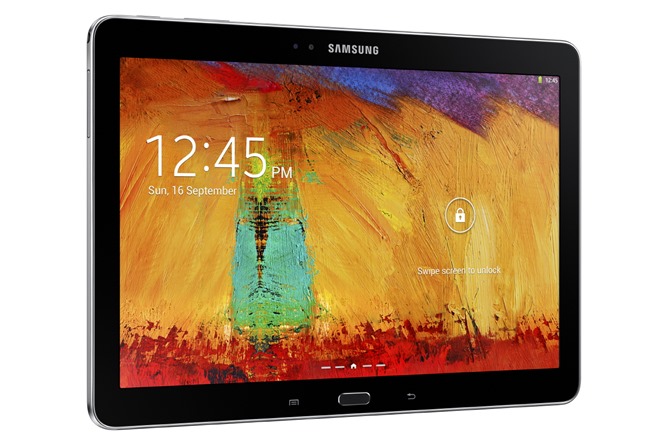 The Galaxy Note 10.1 2014 Edition will release in 2013, so Samsung is now a subscriber of the auto manufacturer and Madden NFL school of yearly release names. The updated tablet trumps the former Note 10.1 with a 2650x1600 screen and the same 1.9Ghz Exynos octa-core and 3GB RAM combo as the Note 3, though LTE versions may default to Qualcomm.

The WiFi version is considerably sleeker and slimmer than the previous model with a depth of just 7.9mm. Styling apes the Note 3 right down to the faux leather and stylus, which is oddly housed on the side of the device. Sorry, Android purists: Samsung isn't letting go of its maddening physical controls on tablets any time soon. The Note 10.1 2014 will be available in black or white.

Software is largely the same as the Note 3, complete with Android 4.3, a ton of TouchWiz accoutrements, and the fancy new S-Pen functionality. Storage options have been expanded to 32GB and 64GB plus MicroSD card, and the rear camera is 8MP with flash. It looks like Samsung is making the Note tablet that they really should have made in the first place.

The Note 3 and Galaxy Gear will be available starting on September 25th in more than 140 countries, and all three devices will be launching in October worldwide. Pricing for the Gear will be $299 USD, but we haven't seen any information for price of the other devices.

We've now got hands-on video with all the new Samsung hardware. Check out our exhaustive posts on the Galaxy Note 3, Galaxy Gear, and Galaxy Note 10.1 2014.

Themendous Is The Company That Makes Google's Android Statues, Here's How They Made The Latest ...