Sony's oft-leaked Xperia Z1 finally made its official debut at IFA in Berlin yesterday, and I had a chance to take a few minutes and look at the company's latest smartphone creation. The Z1 has opted to keep the same basic dimensions of the Xperia Z with its 5" 1080p LCD, enclosed in an aluminum chassis sandwiched between two glass plates. As such, holding the Z1 is very reminiscent of the Z - lots of glass, and an extremely solid, premium feel. Of course, the Z has had its fair share of criticism for the potentially fragile glass back plate, and it seems the Z1 will be equally likely to draw fire on that point. There's also the whole waterproof aspect, which means those fiddly port covers are making a return. 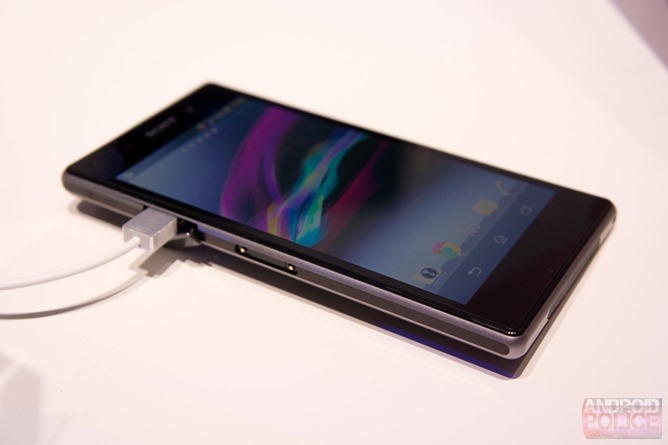 The display immediately got the same mixed reaction I had with those of the Z and ZL - straight on, it looks like a pretty good 1080p LCD. Colors are fairly vivid (I think more so than they were on the Z/ZL) and sharpness is wanting for no one but predatory avians. The issue is the viewing angles. As you can see in the photos and, to a lesser extent, the video, at any kind of substantial angle the Z1's display distorts color and brightness in a rather extreme way. Some may not mind, though I personally find this to be a very 2011 sort of problem - no other major Android OEM (LG, Samsung, HTC, Motorola) seems to be having such an issue with display viewing angles. What gives, Sony? 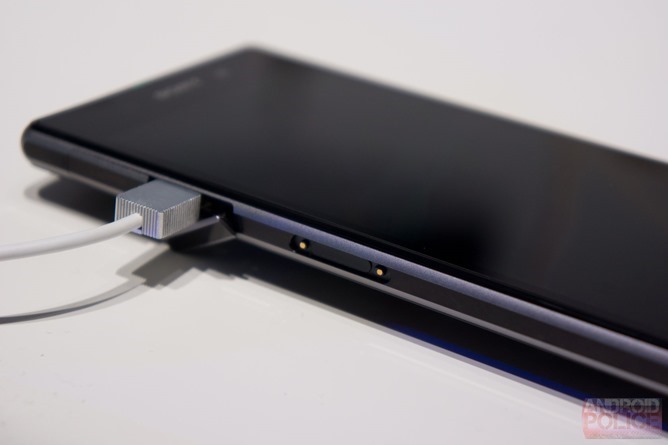 There's a large speaker grille along the bottom of the Z1, pogo pins on the left hand side, a microSD card slot, and a microUSB port. The charging / notification light has been moved under the earpiece speaker, as well, which I think looks kind of cool.

The Android 4.2-based software experience feels very much like what we've seen on Sony smartphones for the last year, albeit with a few new features. While that software has not aged aesthetically as poorly as Samsung or LG's, there's little denying that it could do with a refresh. It is still a more "stock-like" experience than what you'll get on a Galaxy S4, One, or G2, though, and Sony's fans have long made a point of this.

I will say that Android finally, truly feels fast on the Z1. On the Z and ZL, everything felt quick most of the time, but little frame rate drops and stutters here and there navigating the OS made the experience inferior to competing phones at the time. On the Z1, there doesn't seem to be a trace of this. It's fast, fluid, and highly responsive (as you can see in my admittedly less than useful homescreen swiping in the video).

The camera is obviously the Z1's crown jewel, but in the trade show booth environment (super bright lights, phones not connected to web, etc.), there's not really much that I can say about it other than what Sony has told us. I do know that the camera software on the Xperia Z and ZL was incredibly frustrating and finnicky in terms of getting consistent results, but that Sony is touting a new "manual" mode on the Z1. Perhaps this will allow the 20.9MP G Lens camera to really outshine the competition and produce some stunning photos. We'll have to wait for a full review to know, and hopefully we'll have that for you later this month. 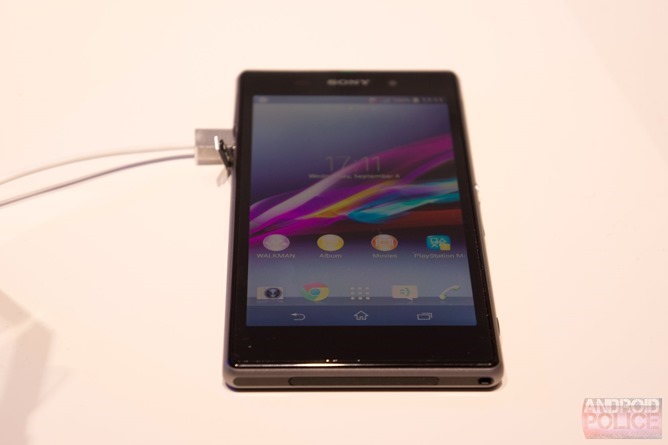 Samsung Introduces The Galaxy Note 3 In A Super-Detailed 6.5 Minute Video