What will form your first impression however, is what's outside. 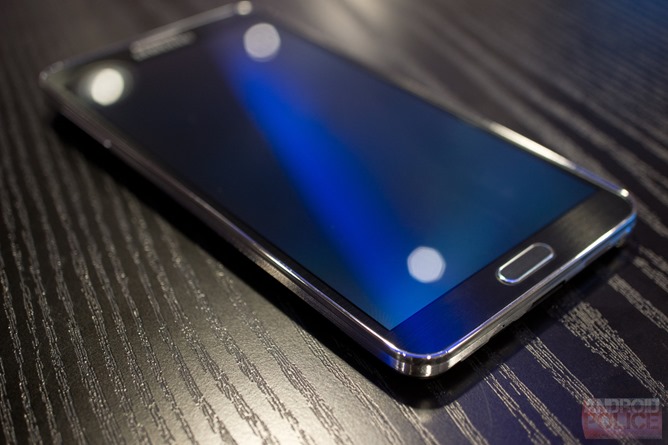 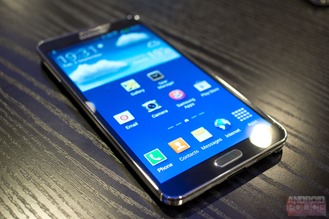 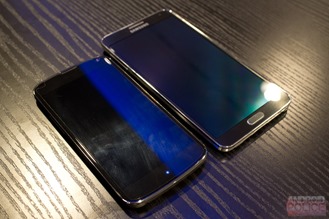 Honestly, the shape of the Note 3 is pretty predictable. It's a slightly more pointy version of the Note II that's a little thinner, and very slightly narrower, while maintaining the same height. It of course has the same button layout as other Galaxy devices: a central home button flanked by menu and back. 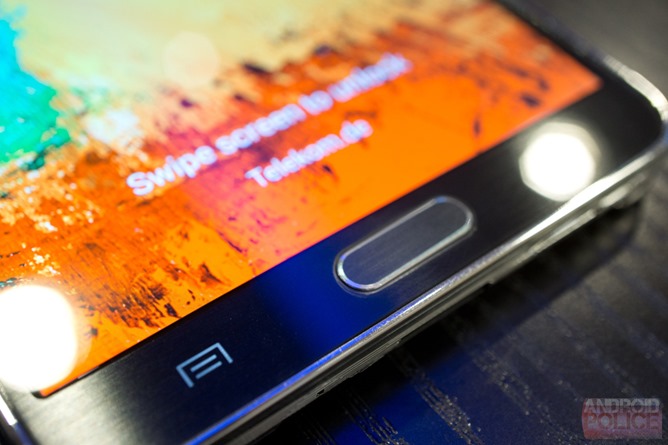 What makes it stand out is the new design metaphor that was explained to me as resembling "a closed book." The band running around the outside of the device has a banded texture (symbolizing pages of course), and around back there's a new leathery plastic texture. Rest assured the back is definitely still plastic (and still removable), it's just textured like leather, complete with fake stitching.

Samsung also has a full lineup of colored back plates, which have a slightly different yet still comfortable texture and the same stitching. The device itself will be available in Jet Black and Classic White, with a Blush Pink version coming to "some markets." 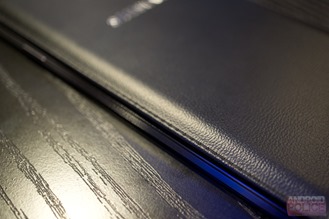 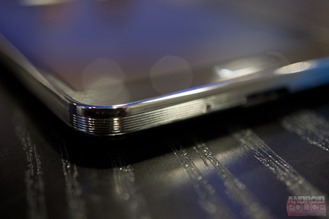 I know it sounds crazy, but the texture is actually really nice. At least, it's much nicer than the old glossy plastic. I could do without the stitching, but the Note 3 is super easy to hold and keep a hold of, and has the warm, inviting tactile feeling of the Nexus line.

Also around back is the camera hump. This houses the Note 3's 13MP camera and a big flash. Not much else to see on this side of the device. 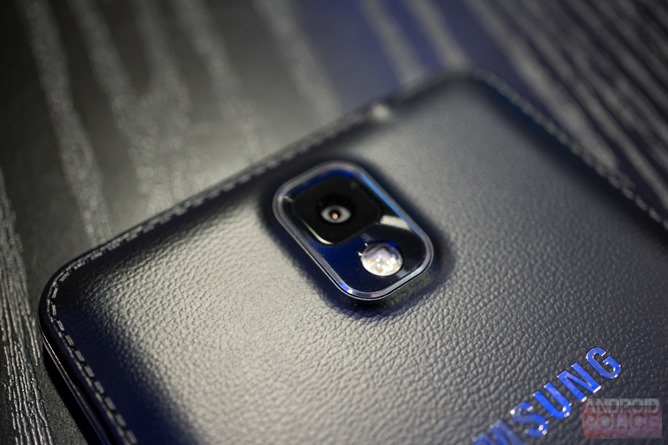 One last thing of interest is that the Note 3 uses a USB 3.0 Micro B connection at the bottom for charging/data transfer. I was told that while the port is different, a micro USB cable can be plugged into "one side" of the port just fine. 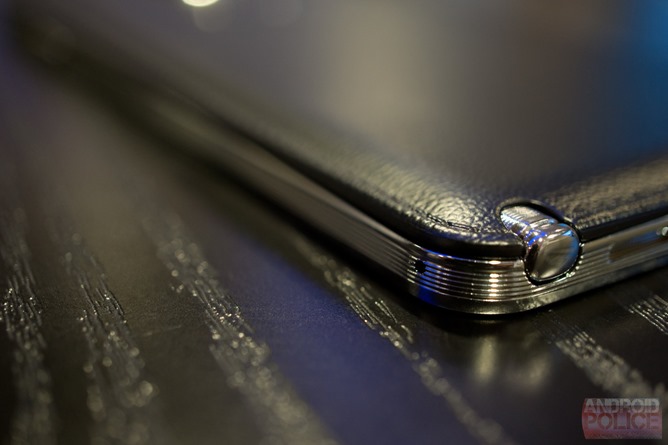 Samsung's big story in the Note 3 software department is the S Pen. Not much detail was given during the hands-on demo about other new software, but it's clear that Samsung wants to continue differentiating the Note line with the S Pen and its impressive functionality.

For this round, Samsung says they wanted to make discovering the functionality of the S Pen easier, so that more people would use it to its full potential. In this attempt, they created Air Command – a little pie control that comes up automatically when you take out the S Pen from its bay. The menu can also be accessed by hovering the S Pen anywhere on the display and clicking its button. 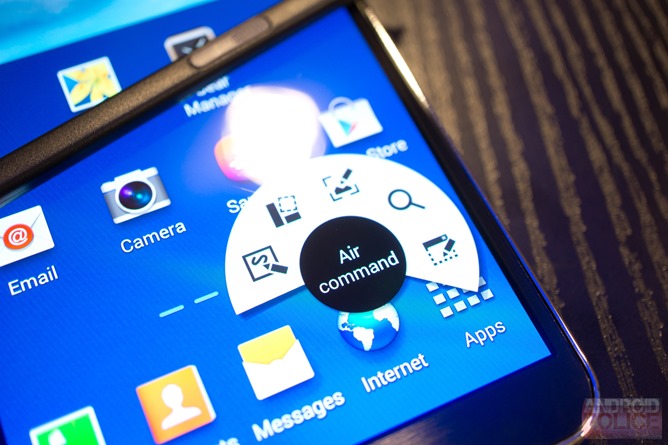 The Note 3's Memo functionality has gotten a sizeable boost. Now, handwriting recognition is much better, and the device can actually do something with things you write. With the S Pen's memo function you can circle text and then take action on it. For instance, if you had written the address to an event, you can circle it and choose to open Maps, which will be auto-populated with that information. The function can open Dialer, Contacts, Messaging, Email, Browser, Maps, and Tasks (to do). Each of these will ask you which default app you want to set if you've got third-party options installed.

This is basically Samsung's private Pinterest. In fact the app even looks very similar to Pinterest except for the brown background – using this, you can use the S Pen to cut out images or text from the web or from your own device to save to a scrapbook along with "metadata" like what webpage the information or content came from. You can organize these pieces into individual boards, and search them later.

Screen Write is fairly self-explanatory – it takes a screenshot of whatever you're looking at and allows you to write on it and save it as a note, much like Skitch.

This is pretty much what you expect – it will search for things on your device or on the web. What's new though is help from the upped handwriting recognition power – you can now find things in handwritten notes and memos, along with photos containing relevant metadata.

Pen Window is probably the most interesting S Pen feature to come with the Note 3. By tapping the icon then drawing a window, you'll bring up a list of compatible apps (things like YouTube, calculator, etc.) that are ready to be used as floating apps. You can, of course, move and resize the apps and open as many as you like, but what's even more interesting is that you can minimize them to what essentially look like chat heads for the given app – a little bubble you can drag around anywhere on the screen. 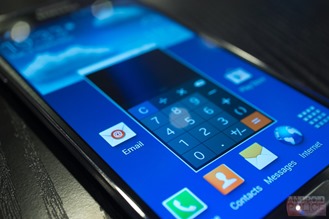 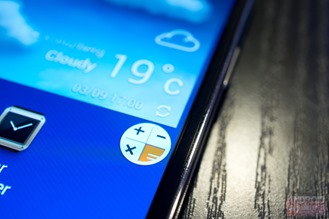 One last feature that was demoed to us with the S Pen is Drag and Drop in multi window. With two windows open, users can now drag content from one into the other. The obvious use case for this is uploading or sending an image. Open gallery in one window, messaging in another, and go to town.

My Magazine is a feature that doesn't really fit with any other subhead. It's kind of like a cross between BlinkFeed and Flipboard. The app basically aggregates news and updates from your social media accounts, news sources, and other sources to create an "in-the-moment content experience." The interface is a series of swipes in various directions with big images and text for story covers.

There's not one. At least that we've seen or heard of on actual units. This is a feature that's been rumored lately, but there wasn't even a whisper of it during the demos, no information in official press releases, and no evidence of it on the device that I saw during my brief time with the Note 3. It's likely that this feature is still in testing and we'll see it on a future device.

That pretty much covers it for the Note 3 for now. It's not a radically different device from its predecessor. The specs are definitely bumped up a notch, and there are definitely better, easier-to-use features included, but this refresh doesn't seem to focus on jam-packing whacky features into the device. One Samsung representative at the demo suggested that the company is focusing less right now on adding more features, and focusing more on improving the experiences with the things that they already have implemented.

I, for one, find this attitude refreshing for a company notorious for cramming ten pounds of features into a 168 gram bag.

Samsung says the Note 3 is going to be available in over 140 countries on September 25th and globally in October. The new Note family will be available in the US, with the Note 3 specifically confirmed for T-Mobile, AT&T, Sprint, Verizon, and US Cellular.