The new Nexus 7 is not an expensive device, but it feels distinctly premium. The build quality has been markedly improved from the 2012 incarnation and the screen is incredible. It might not be a big investment (thanks to Google's aggressive pricing), but it's still an investment to protect. DODOcase makes some of the most attractive cases and sleeves you can get for a tablet, but they come with a big price tag.

Does it make sense to pair an inexpensive Nexus 7 with one of the more pricey cases out there? We've got a Durables Sleeve, DODOcase Solid, and DODOcase Folio to take a look.

This is the most iconic version of the DODOcase – the style that started it all. The DODOcase Solid is made by hand in San Francisco by experienced bookbinders. This thing really does look like a book, and not just at first glance. I've had people look at the case several times before realizing there was something amiss.

The exterior is essentially a hardcover book made from a cardboard base covered with heavy cardinal-red bookcloth. If you want to know what it feels like, grab a real book, take off the dust jacket, and get to feeling. Inside is a gray gunnysack material that, again, feels very authentic. 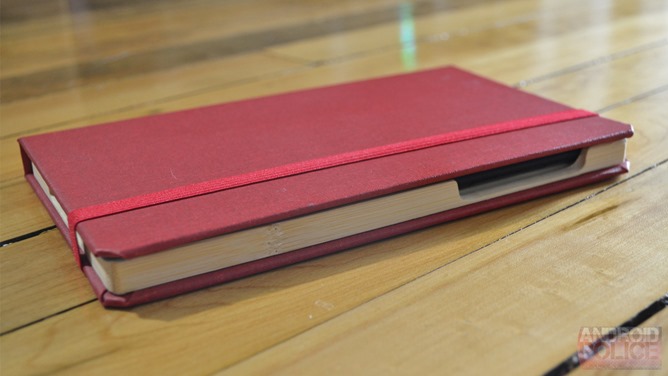 When open, the right side of the "book" is home to the bamboo tray that holds the Nexus 7. From the outside, the bamboo is oriented in such a way that the grain looks like the pages of a real book – it helps complete the illusion. I was initially worried that my tablet would not be held tightly enough by this frame. However, the little leather nubs in the corners really pin it down. If anything, the DODOcase Solid might hold the tablet too tightly.

The first time I removed the N7 from the DODOcase, the back cover of the tablet began to separate. Yikes. You have to bend the case just a little to get two corners of the tablet free, then slide it out. It's fine once you figure it out, but the device is definitely not going anywhere.

The cover has a magnet placed to work with the Nexus 7's sleep/wake sensor, and it's a good thing. The 2013 Nexus 7 has a much more dramatic taper on the sides than the 2012 model. That means the power button and volume rocker are tucked in more. The DODOcase Solid has a cutout to access these buttons, but they're just in there a little too deep. You can hit them, but not conveniently. The magnetic cover saves you from messing with the power button too much, but the volume rocker is almost as tough to get at. Taking screenshots with the N7 in a DODOcase is annoying. 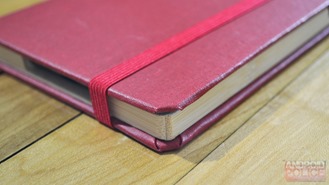 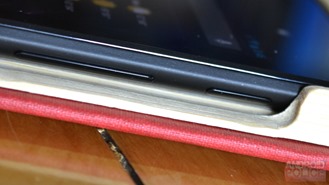 The entire package feels extremely premium and durable, with one exception – the elastic band. Like many cases, there is a strap that you can wrap around the case to keep it closed. This elastic closure feels a bit cheap and rough. I don't think it's going anywhere, but it doesn't feel awesome like the rest of the DODOcase Solid.

One issue here is that the case doesn't have any mechanism to stand up. It's essentially a book, so bending it backward in a stand configuration isn't happening. This makes it a bit awkward for using the tablet in landscape, too. That's probably a deal killer for some people, but I can live with it. 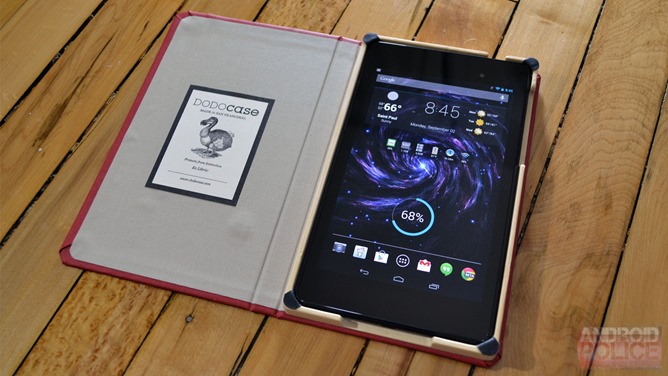 Overall, this is a beautiful case that seems to offer good protection for the Nexus 7. This one is $79.95, plus $4.95 if you want a camera hole in the back.

Whereas the DODOcase Solid is about being svelte and bookish, the DODOcase Folio is about features. This case is physically a bit larger than the Solid because in addition to the tablet, it houses a notepad, business card pockets, and a pen holder. It also has the same premium construction and handmade appeal as the Solid. 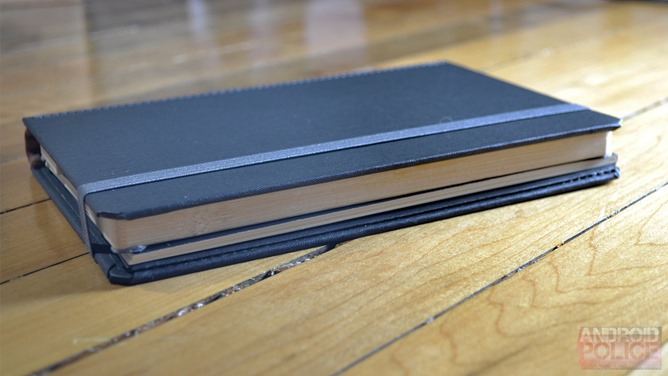 The outside of the Folio is made from dark gray bookcloth, but the spine is a leather strip sewn right into the front and back covers. This is decidedly the least bookish aspect of the case, but it kind of works and looks cool. When you open the case, the gray fabric is carried through, but you can't see most of it because of all the stuff in there.

The Folio is flipped from the orientation of the Solid. The tablet is on the left, and the right is where you'll find the 24-page refillable notebook with Mohawk Superfine paper. Seriously, this paper is awesome, and I've never called paper awesome before. The whole thing screams quality from the grain and weight of the page, to the stitching holding each sheet in. It also screams "I'm expensive," because it really is. Only 24 sheets and a refill is $9.95. You can use a regular notepad, but that rather defeats the purpose of buying the DODOcase Folio. 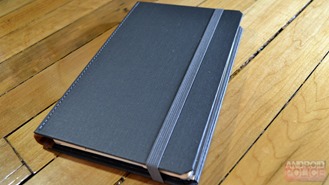 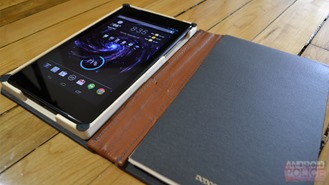 Under the notepad are a pair of business card holders, and on the inner surface of the spine is the pen slot. Behind the flap holding the notepad in place is an extra slot you can tuck random (thin) items into. The only thing this case is missing is stand capability. Like the Solid, this is for transportation and in-hand use, not watching video at a table. Although, the Folio feels too heavy to hold for extended periods of time.

Just like the Solid, the Folio has a bamboo frame to hold the tablet in place. It is similarly serious about grabbing onto your device. However, because of the way the case is laid out, there is nowhere for a magnet to interact with the N7's sensor. Thus, you're stuck using the power button all the time, and it's not any more convenient here. It also has the same somewhat-cheap-feeling elastic strap to hold it closed. 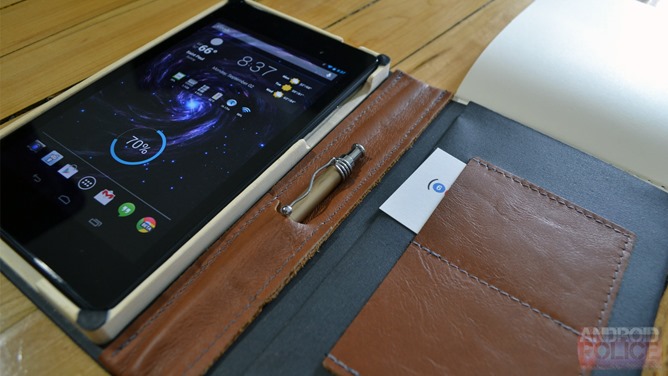 When you get everything bundled up in the Folio, it's a neat, dense little package. I can see someone using this case if they need more than just the tablet, but not a whole bag. It's not super practical for day-to-day use, but it does have kind of a wow-factor. This case is quite a lot more expensive at $124.95.

Okay, all this book-shaped stuff is fine, but what if you just need a nice slipcase to keep the N7 safe? That's the Durables Sleeve. It's a much simpler affair than the standard DODOcases are, but it will probably have wider appeal. 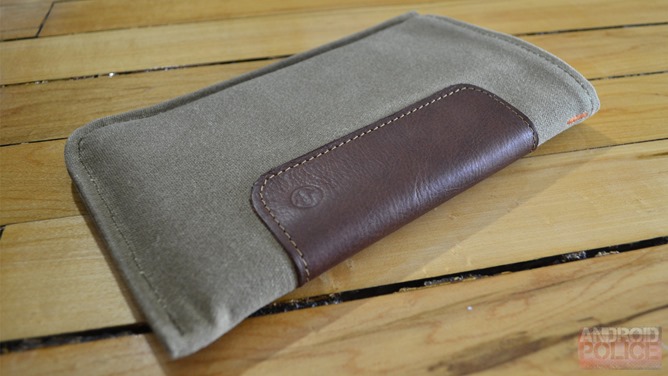 The sleeve's exterior is made from a light brown waxed canvas material. It's just a little rough, but feels satisfyingly durable (as the name would imply). There is a lovely leather grip sewn on to one edge of the sleeve that wraps around both sides. This gives you just a little more grip when picking the case up. The interior lining is a funky bright orange twill that will keep your tablet safe and sound. Sandwiched in between the two visible layers is a third layer of recycled felt for additional padding. 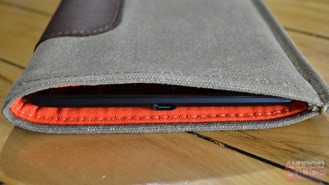 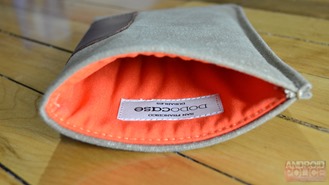 The Nexus 7 seems very well protected by the Durables sleeve. I was initially concerned about a slipcase with an open top. I usually opt for a case I can close so I don't inadvertently pick it up upside down and dump the tablet out on the floor. To my surprise, that's not a problem here. The Durables Sleeve is a very snug fit, so any pressure from holding it is sufficient to keep the table in place. I pick this thing up the wrong way all the time, and the N7 has never made a break for it. Grabbing the sleeve by the sides or the end lets the tablet slide right out, as well. 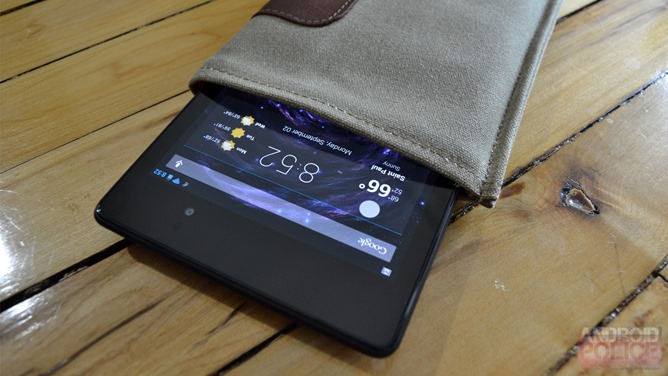 The craftsmanship on display here is truly amazing. There's not a stitch out of place, and it feels luxurious in a rugged sort of way. I feel like this isn't the kind of sleeve that will wear out — it gets broken in. The Durables Sleeve is a very practical way to keep your tablet protected, but it's pricey too. This one will run you $49.95.

Should You Buy One?

These are expensive cases, yes. If price is a major factor, no one would blame you if you grabbed one of those $5 sale cases on Amazon. However, if you don't mind spending a little more for something well-made, there's an argument to be made for the DODOcases.

The DODOcase Solid is elegant and understated. You can haul your tablet around in this case just about anywhere and no one's going to bat an eye. There is an undeniable cool factor in having a case that looks so much like a book. The magnetic wake feature is great on this case, and the tablet is held in place very well. There's no stand, but it's kind of understandable considering the book construction. I really like the way the Nexus 7 looks in this case. If that's shallow, then call me shallow. For $79.95, I can see this being a justifiable purchase if you aren't looking for a stand and like pretty things. 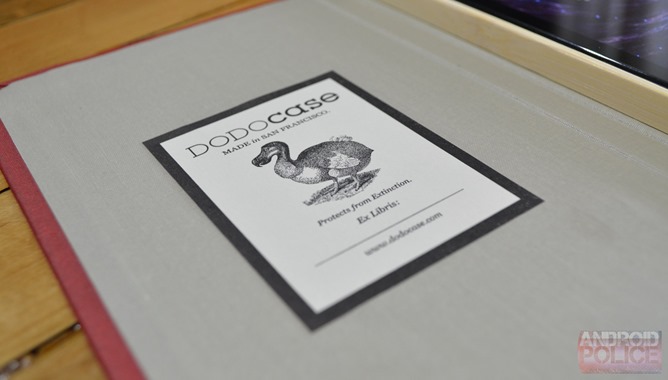 The Durables Sleeve is simple, efficient, and very portable. I like that it doesn't weight the tablet down while you're using it, and it looks so good. The fabrics are high-quality and the stitching is impeccable. If you have $49.95 to spend on a case, get this. I like it quite a lot.

As for the Folio, I can't really say most people should consider this one. It's heavier than the other cases, has a notebook with expensive refills, and no magnetic cover. It's just a pain to get at the power switch and volume rocker in this case. I think it looks neat, and there are certainly people that would be willing to just stuff the essentials in the Folio and head out, but the price is up there. At $124.95, I can't recommend this to most N7 owners.

I'm disappointed the DODOcases don't have stands, but the company makes a different product for that – the Hardcover line. These are cheaper cases with a reusable adhesive to hold the tablet in place. If you do decide you want a DODOcase, you had better plan ahead. Each one is made to order, so you'll have to wait 3-4 weeks for yours to arrive.