Piper is a nifty little gadget that combines a number of recently deployed technologies to create a connected and hyper-aware home automation hub. The project has been getting a lot of press since it appeared on Indiegogo a couple of weeks ago, and it passed its $100,000 funding goal today. There's another twenty days before the project ends, so the creators won't be wanting for funds.

Piper is essentially is a little box that's stuffed with a ton of sensors and WiFi connectivity, making it the hub of a connected house. It functions as a security and monitoring tool first and foremost, thanks to a panning wide-angle webcam and microphone. The companion app for Android or iOS will let you peek at your home anytime, from any network, and an integrated motion detector can alert you to burglars in real time. It's also got a speaker and a siren, so hopefully it could scare off a potential home invader (or a pet, if you feel like having some fun). 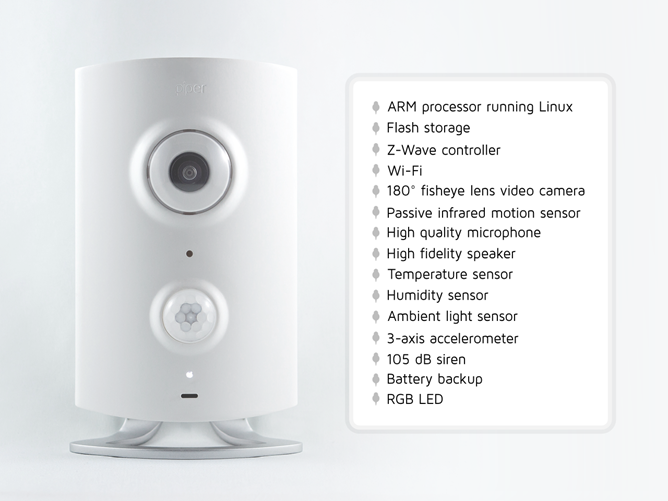 Other sensors include temperature, humidity, and ambient light. What are those for? Well Piper also functions as a Z-Wave controller capable of commanding any compatible lights or appliances connected to your home LAN. If you're trying to view the camera feed through the app and it's too dark, Piper can automatically flip on some lights via Z-Wave. Piper can even automatically cache video if it's damaged. Pair all that with the smartphone app and you've got an impressively compact and relatively cheap start to home automation. The system requires no monthly fees.

Piper runs on Linux with ARM-based internal hardware, and the creators are working on a version that uses a 3G SIM card along with WiFi. Backing tiers start at $209 for hardware (at least if you're in the US). Piper has been in the works for a year now and the Indiegogo campaign is just to fund the initial mass-production run, so the estimated shipping time for the WiFi Piper is November of this year.