If you're old enough to remember NFL Blitz, or NBA Jam before it, you'll recall that in the 90s, these titles represented the height of sports-related absurdity. The Blitz series became watered down over time, but after separating from the NFL license, it brought back its over-the-top shenanigans in the mid-2000s, and the series continues to this day. But here's the thing, neither Blitz nor Jam have anything on the unrealistic mayhem that is on display in HeroCraft's upcoming title, FootLoL: Epic Fail League. 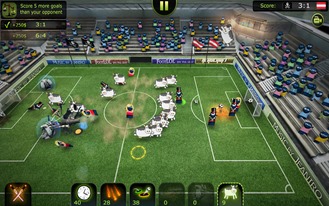 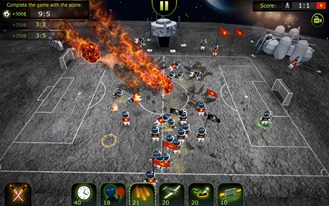 You've glanced at the screenshots already, so it should go without saying that this game has no connection to any real soccer league of any kind. Players get to sabotage the game using bombs, aliens, cannons, machine guns, and even rampaging cows. These shenanigans may make for great fun, but they're not the kind of behavior any self-respecting organization would encourage. Yet as the bookkeeper in this whimsical soccer tournament, your job isn't to win, it's to make sure each game ends with a certain score, and to do so using whatever means necessary.

The game is already available for Mac and Windows, but the Android version is coming soon, and if you also want it to come to Steam, go give it your vote.

We all love football – but how badly do you want to win? FootLOL lets you use mines, shields, UFOs, cows, glue and many more cheats to decimate the opposing team and protect your players. Your opponents have often got the same tricks as you so it’s not as simple as knocking the ball in.  You’ll need to beat each level’s targets – which might mean losing! Once you’ve finished FootLOL’s tournament mode, you can play against the computer or go online for gripping multiplayer.

Andrey Babak,  CEO & Co-Founder of Lions Shade: “In fact, I couldn't care less about football (sorry all you footy fans out there) and know nothing about Ronaldo, Messi, Ben Affleck and the rest. So, I wasn't ignoring the game rules per se, so much as acting in total ignorance of them. I was just focused on making a fun, addictive, silly little game - and I think I succeeded.”

“We really liked working with the super-talented guys at Lions Shade. Their irreverent, affection attitude resulted in a great atmosphere - and in a game that everyone at HeroCraft truly loves to play”,  says  Alexey Sazonov, Sales and Marketing Director of HeroCraft.

Turn football into FootLOL, with traps and tricks galore!

− four planets, each with several types of field

Vote for FootLOL on Steam Greenlight!

[Bug Watch] 2013 Nexus 7's Touchscreen Issues Persist, Even Worsened, On Some Units After ...