Update: It appears the deal has ended. The listing isn't even appearing anymore. Hope you got in under the wire.

The 32GB Nexus 7 is still in short supply at a lot of retailers, including Abt Electronics. That's not stopping them, though. Abt is offering a good deal if you order a new 32GB Nexus 7 now with the understanding that it's backordered 2-4 weeks. If you move before before the end of the month, Abt will give you an instant $60 discount with free shipping. That's $209, which is less than the cost of the 16GB N7. 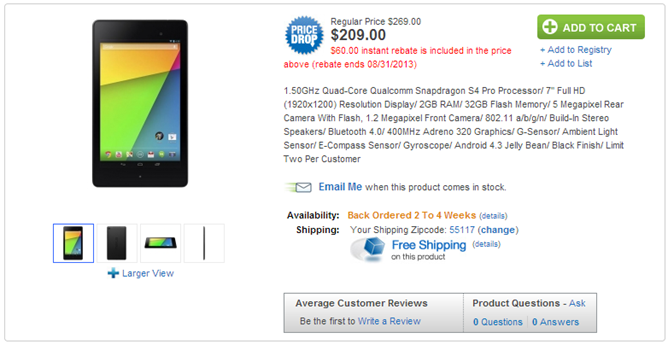 So who the heck is Abt Electronics? Are they going to steal your credit card number and sell it to Czech gangsters to fund the opium trade? No, of course not. Why would you even think that? Abt Electronics is a legit retailer with over 9 stars on Reseller Ratings. There are a ton of positive reviews, and Abt always responds to complaints.

You might not get the immediate satisfaction of 2-day Amazon Prime shipping, but this is a killer deal.

[Abt Electronics via SlickDeals]

The Smart Cube Gives DSLR Cameras The Ability To Run Android Apps, Promises To Reshape The ...