If you're a SHIELD early adopter, you may want to head into the settings menu and grab the latest update – it's a good one. Update 59 brings improved PC streaming stability, along with support for more PC Games, like FIFA 13, Call of Jaurez: Gunslinger, Mortal Kombat: Komplete Edition, and several other. There are now 31 officially supported PC titles. Not bad. 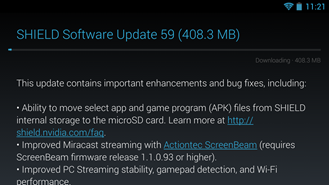 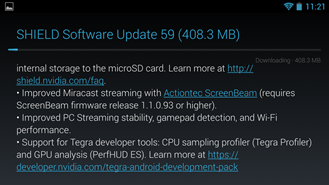 Aside from that, it also adds support for Tegra developer tools and possibly the most anticipated feature: the ability to move apps to the SD Card. Before you get excited about that, however, it's worth noting that, due to limitations within Android, the feature can only move the apk – app data will stay in SHIELD's local storage. Considering most apks aren't very large (up to 50MB in size), it's hard to say how much data this will actually free up. Of course, the Galaxy S 4 suffers from the same issue – as I've already said, this is a technical limitation within Android, thus no manufacturer will be able to override the system.

The update should be available on all SHIELD units now, so go ahead a grab it.

Yahoo Modernizes Mobile UI Across Many Of Its Properties, Including Mail, Messenger, News, And More

ARCHOS Announces Updated Versions Of The 101 XS And Gamepad, Introduces A Tablet For Kids And A ...