As Motorola's first phone developed start to finish under Google's corporate umbrella, the Moto X is getting more than a little attention from developers, modders, and ROM enthusiasts. They'll be happy to know that the kernel source code for various models of the Moto X are now available on SourceForge. Kernel code is available for three models: AT&T (XT1058), T-Mobile (XT1053), and Sprint (XT1056). 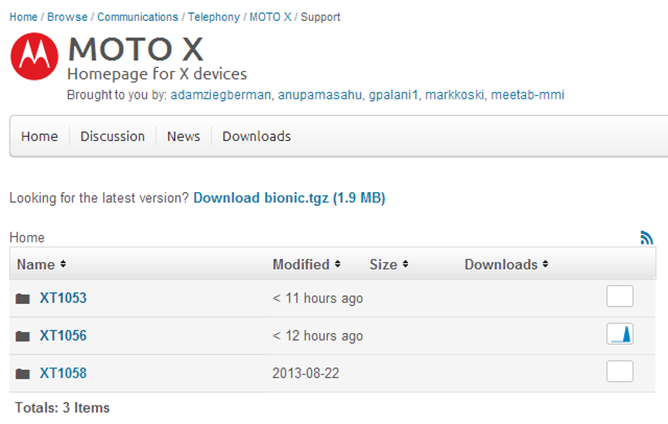 The choice of models is a bit surprising, since there's still no word of when Sprint will start selling its version of the Moto X, though they've had a sign-up page for weeks. T-Mobile won't be selling one at all, but Motorola has stated that they'll be offering a Moto X with T-Mobile bands for direct sale. Verizon's model, which is not included in the initial published source code at the moment, is set to go on sale tomorrow on the carrier's website.

Kernel source code isn't the be-all, end-all of modding, not by a long shot. But it's generally a good place to start, and it enables ROMs like CyanogenMod to load up their own custom kernels, assuming that your carrier of choice doesn't hate you and/or your bootloader can be unlocked. At this point the amount of end users who fit those demanding standards is exactly zero, but hey, there's an XDA forum already alive and kicking. Go nuts.