According to Googler Virgil Dobjanschi, there's a new version of Google+ for Android rolling out the Play Store right now. While there's no official changelog and the Play Store entry doesn't seem to be telling much, the biggest addition is a new notification for when your photos have been given the "Auto Awesome" treatment. If you'll recall from the 2013 Google I/O presentation, Auto Awesome is a processing feature that automatically turns similar photos into collages or animated GIFs. 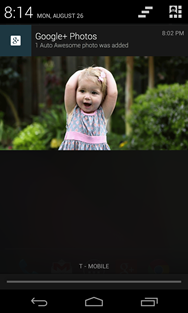 The Auto Awesome feature happens in the background and there's no reliable way to activate it aside from taking similar photos that Google+ can recognize. The new notification should be useful if you're tired of checking the web version of Google+ to see when your fancy-schmancy animated GIFs are available. Dobjanschi mentioned other changes as well, but they're mostly bug fixes and performance updates. We'll have an APK teardown posted soon.

As usual, Google is rolling the update out in stages. The Play Store entry was updated late last night, but there's no telling when you might see the download on your device. Since this process seems to be rather elongated as of late, you can go to the mirror below and download the 4.1.1 APK file for side-loading if you're impatient. Because it's never too soon for automatic GIFs, I suppose.