The Canadian Moto X on Rogers is the latest addition to Motorola's Bootloader Unlock program, a growing list that already includes the RAZR HD in Canada and American devices such as the Photon Q 4G LTE on Sprint and the developer edition of the Droid RAZR M on Verizon, among others. No American versions of the Moto X have made the list yet, but Motorola says that support is coming for devices on US Cellular, Sprint, and T-Mobile. 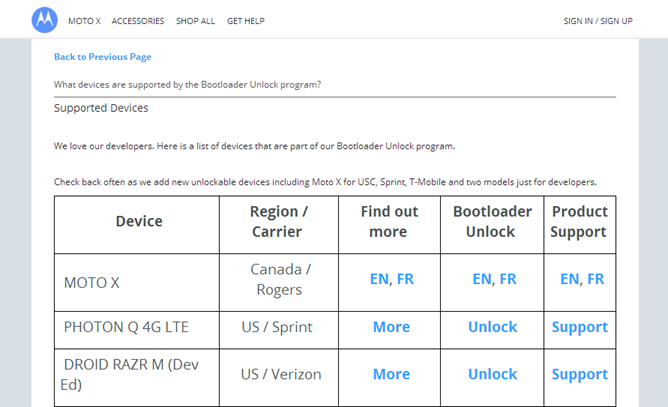 With this program, Motorola gives users their blessing to root their devices and flash custom ROMs, but those who choose to do so still void their warranty. The company is pretty explicit that it will not cover devices that have been unlocked, even if whatever goes wrong is seemingly unrelated to unlocking the bootloader. Still, it's comforting to see more devices added to the program, saving people from having to purchase more expensive unsubsidized developer editions.

There's currently no timeframe for when future devices will be added to the list, so hang tight for now. They're coming.

Moto Maker Now Open To All AT&T Customers With Or Without Contract, No Stupid Card Needed Pre-Orders Go Live For The Neptune Pine, A Smartwatch With An Identity Crisis