AT&T customers now have one less reason to leave the house. Moto Maker is completely open to everyone, doing away with the need for those lame Moto X cards AT&T stores have been handing out. Just go to the site, design your phone, and buy it on the spot. If your wallet is weighed down by cash, you can also buy the Moto X off contract for $579 starting today. On-contract pricing is still $199 for 16GB and $249 for 32GB. 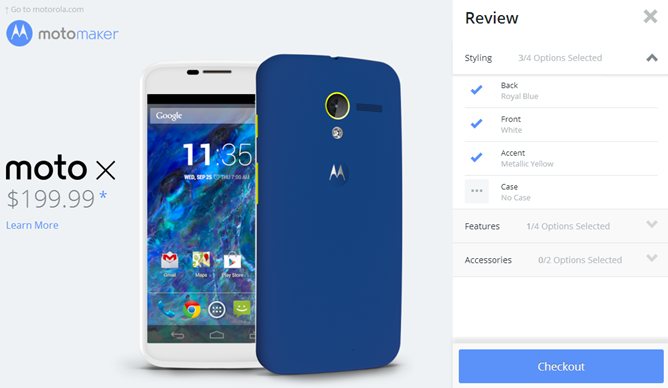 Moto Maker allows buyers to pick from a white or black front, nearly 20 back cover colors, and 7 accent colors. Storage size, power-on message, and wallpaper can also be customized. If you go the custom route, delivery times are estimated at 8 days right now.

Motorola did point out that Verizon is getting the Moto X on August 29th, but it's only going to be in black and white at first. The Moto Maker customizations won't be live for any other carrier until some time later this year. We don't know when that with be. Could be weeks, could be months

Enblink For Google TV Gives You Wireless Control Over Home Lighting And Other Devices, ...