Perhaps you noticed that I was a little light on post activity last week – that's because I was on a road trip to visit my family in Virginia. Just before I left, Arkon contacted me about a new product in their car mount lineup: the IntelliGrip NFC Car Mount ($35). Considering the timing, I figured it would be the perfect opportunity to give it a shot.

Basically, the NFC Mount is nothing more than Arkon's Slim-Grip Holder, but it has an embedded, re-writable NFC chip inside. Like with other NFC chips, writing/re-writing to the car mount is a breeze – just fire up NFC Task Launcher and get to work. It took me less than 30 seconds to get my mount set to disable Wi-Fi and fire up Google Music as soon as I toss the phone in the dock. This, of course, is the simplest of functions, and you can easily set up more complex actions.

As already mentioned, the dock itself is just like the Slim-Grip Holder, so it will fit an extremely wide range of devices – from a small 3.5-inch phone up to a 10-inch tablet. This is made possible by the unit's spring-loaded mechanism paired with two different lengths of rubber-coated feet – four short, and four long (two in each set). The feet can be mismatched in order to better accommodate your device; for example, two sets of short feet work best for most phones, whereas a short/long combination works better for something like the Galaxy Note/II (in portrait mode). Naturally, large tablets need both sets of long feet. They're incredibly easy to switch out, so you can just play with it find the setup that works best for your device – due to the location of the NFC chip inside the phone and mount, it may be necessary to try a few different arrangements in order to get it to register perfectly every time. 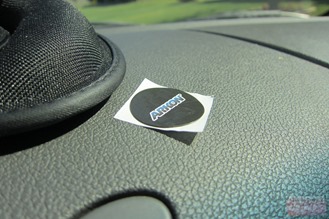 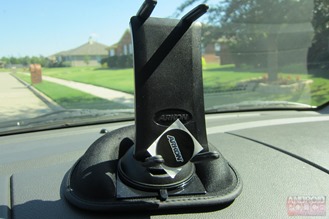 Speaking of, if you simply can't find a way to make your phone "see" the NFC chip inside the mount, Arkon includes an NFC sticker that you can place anywhere on the mount. But therein lies the main issue with this unit: if you already have a car mount of any kind, adding NFC capabilities is as simple as placing a sticker on it – boom, instant NFC car mount. Of course, if you don't already have a car mount and know you want to use NFC when you get one, it's hard to go wrong with the IntelliGrip NFC Car Mount from Arkon – having a built-in NFC is just more elegant than slapping a sticker on the mount, in my opinion.

However, there are device-specific issues to consider. For example, the mount worked perfectly with my Nexus 4 – the programmed actions launched without a hitch every single time I docked my phone. My Galaxy Nexus, however, had a strange reaction: every time I turned the display back on while the phone was in the mount, it performed the NFC action. This could be an issue exclusive to the GN, but it's still something to make note of, as it's incredibly annoying. If you're the type who uses a tablet in the car, you're likely going to run into even more issues: I could only get my N7 (2013) to see the mount once in every 10 tries (or so). Disappointing, but the mount would really need to be at least twice its current size in order to better accommodate tablets; a change like that would essentially make it incompatible with phones, so it's a stalemate. 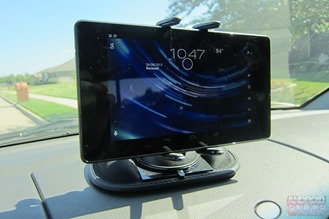 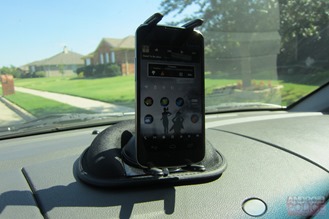 Despite this, if you're looking to pick up a new car mount, the IntelliGrip is still an excellent choice. If the built-in NFC doesn't work as planned – which it should for most phones; tablets are another story, but that's the case with any device mount/NFC combo that isn't designed specifically for larger devices – you can always use the included NFC sticker to make it work. It's really a win-win. Head below to buy, if you are so inclined.

Pushover Gets A Facelift For Version 2.0, Now Has A Slide-Out Menu, Swipe To Delete, ...