As expected, the long-rumored Moto X has debuted on AT&T for $199.99 on a two-year contract. The device is only available in white and black at this moment – Moto Maker is still not live, but it should be soon. This price is for the 16GB edition of the phone. No sign of the 32GB version yet. 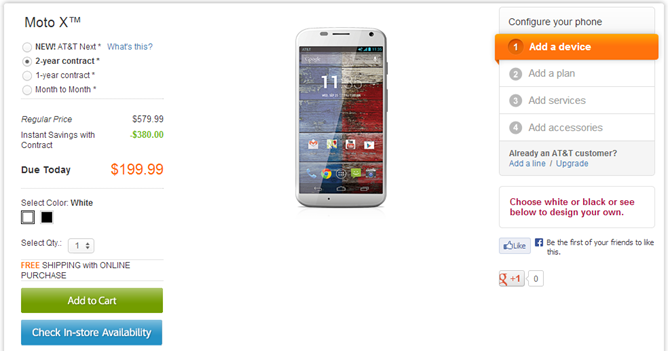 The device is online now with free shipping, or you should be able to swing by a store and grab one at the crack of dawn. There are supposed to be Moto Maker kiosks at some stores, but the website isn't giving up the locations as of yet. AT&T has the exclusive on Moto Maker for a bit when it does launch. Other carriers and unlocked devices will get access later. AT&T customers should have a web version of Moto Maker as well as kiosks, but that hasn't been made entirely clear yet. The video below shows the customization process, and it looks like a regular web browser.

The Moto X doesn't have the raw specs you get with some phones, but the software is close to stock and it has some unique software features. If subsidized phones aren't your thing, you can still get it for $579.99

HTC One Mini Up For Grabs From AT&T