Big things are in the pipeline for the Android version of Chrome, and those big things are coming soon to the beta version. This is the biggest update I've seen on Chome for Android, so let's break down what's new in Chrome 30 Beta.

Ever notice how the gestures in Chrome for Android kind of, well, suck? Now they don't. Hopefully. The janky edge-swipe to change tabs has been replaced by a much more natural gesture - simply swipe left or right inside the URL bar area up top, no need to grab an edge. You can also pull down on the URL bar to reveal the tab interface (awesome, right?). The most interesting (though perhaps not that useful) gesture is for the menu button, which you can now swipe down and hold, then release to select an option. Not sure how I feel about that, but it's there. 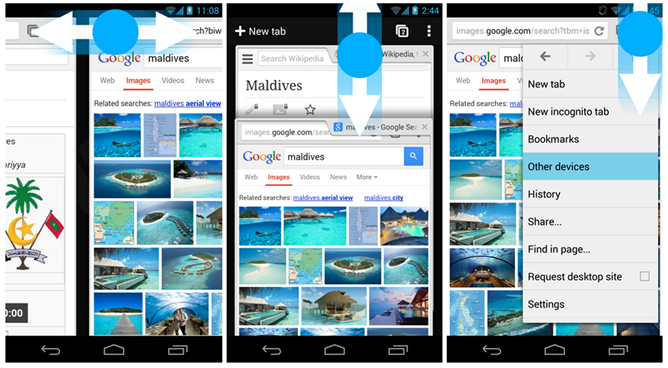 Searching by image in Chrome for Android was kind of a pain in the butt before, so Google's implemented a brand-new (and much easier) way to do it. Just long-press on an image and then hit "search" in the resulting dialogue, which will then search for that image with your selected default provider. Neat.

WebGL is a standard Google and a number of open web advocates are trying to push as the 3D / 2D rendering standard on the web. Until now, though, that didn't do you much good on an Android device, as WebGL was not supported in Chrome for Android. Now it is. Google suggests trying out this web page (it's a race car!) as a demo, though that won't really work yet because the new beta isn't actually out on the Play Store.

This is a pretty big deal, and will allow web developers to create even crazier mobile-friendly web content. The catch is that only devices with "high-end GPUs" are supported, though Google says the Nexus 4 and Nexus 7 (current-gen, presumably, not 2012) will be WebGL-compatible. No word on the Nexus 10, oddly.

These changes aren't any less cool, but they're more bullet point-y than the previous ones.

There are a few other, smaller changes noted on the Chromium blog, if you're interested. The official Chrome Blog covers the gesture and image search stuff. All in all, this is easily shaping up to be Chrome for Android's biggest update ever. As I said, the beta is not yet live on the Play Store, but it should be shortly.

DICE+ Is A 6-Sided Die That Talks To Your Gadgets Via Bluetooth, Pre-Orders Available Now