EA isn't letting its mega mobile racing franchise stagnate. The latest update to Real Racing 3 is version 1.3, adding iconic muscle cars from Dodge and Shelby. Four cars have been added to the roster: the 1969 Dodge Charger RT, 1971 Dodge Challenger RT, 1966 Shelby AC Cobra 427 (I think - going by a screenshot and some Wikipedia sleuthing), and the 1967 Mustang Cobra GT500.

According to the What's New text, there are also new events, new difficulty settings, tweaks to car physics and cameras, and "additional social networking options." Posters on the FireMonkeys developer forum say that means Google+ integration, as a G+ sign-in option has been added to the Settings page. 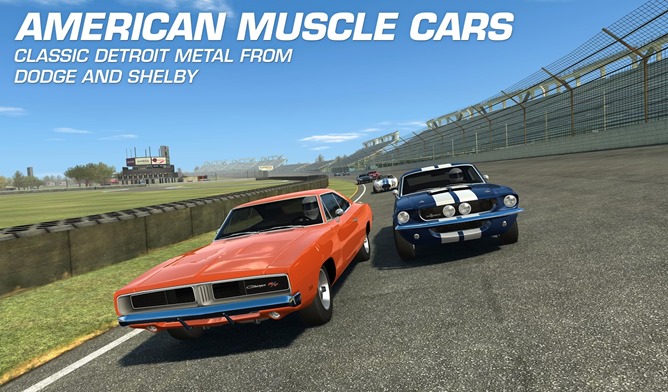 The rest of the game remains intact, time-based IAP upsell and all. It's still free to play, though you'll need to spend a lot of time getting in-game credits (including the exceedingly rare gold coins) if you want to unlock the new muscle cars without spending real money. Real Racing 3 is compatible with most newer devices running 2.3 and up. International readers, note the separate Google Play Store listing.

An iconic generation of cars joins Real Racing 3’s diverse garage, with the introduction of timeless classics from Dodge and Shelby.

If you have any issues to report or suggestions to make, please visit http://www.firemonkeys.com.au/support

[New App] Motorola Touchless Control Is Live In The Play Store, Only For The Moto X And New ...